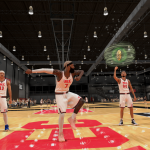 We’re at midcourt, and the ball is about to go up…it’s Monday Tip-Off! Start your week here at the NLSC with a feature that’s dedicated to opinions, commentary, and other fun stuff related to NBA Live, NBA 2K, and other basketball video games. This week, I’m tipping things off with some thoughts on the desire and the difficulty of ending online sessions of NBA 2K on a high note.

It’s now several months too late to pay tribute to the late Kenny Rogers, as well as somewhat out of place in content about basketball gaming. However, his signature song, “The Gambler“, provides an apt metaphor for this week’s topic. As the song tells us, in life – as in playing poker – there’s wisdom in knowing when to hold ’em and when to fold ’em; when to walk away, when to run. The metaphor resonates because it’s important to know when to call it quits, when to persevere, and how to play the hand you’ve been dealt, literally and figuratively speaking.

Not everything has the same stakes, of course, but the metaphor works for a variety of scenarios. On this occasion, I’m applying it to online sessions in NBA 2K. Getting into the online scene over the past few years has been an interesting experience. It’s been frustrating at times, but also a lot of fun at others. Something that I and the rest of the NLSC Pro-Am squad have learned is that it’s very easy to play one game too many, and thus end the night on a sour note. It’s disappointing to end an evening of online hoops that way, and unfortunately, it isn’t always easy to avoid. Even when you know you ought to fold ’em, you can end up sticking around for a few more hands.

The highest note that online sessions can end on is obviously a victory, preferably one in which you’ve been able to play a significant role or at least had some fun moments. It’s a satisfying game that leaves you feeling good about the session, and eager to play again soon. A well-played game that resulted in a win is the best case scenario, as finishing online sessions on a loss seldom sits well. On the other hand, a loss can be a good excuse to call it a night before it gets too late, and if the game was competitive, you can still take solace in the fact you went down swinging. It’s a blowout loss full of frustration and toxicity that really brings the whole night down, ending it with a thud. 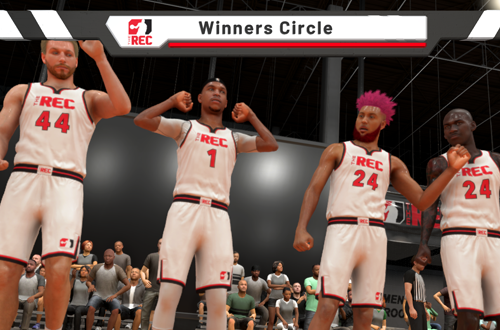 As I’ve previously documented, playing online in NBA 2K can be quite hit and miss, especially if you’re flying solo and teaming up with randoms. Even when playing with a friend or a full squad, the lack of proper matchmaking, legacy gameplay issues, and subpar server performance, can lead to a disappointing experience. Of course, you can be lucky and have everything fall into place. As such, if you play three games of The Rec, Pro-Am, or Park, all three may well be very enjoyable. Then again, the first two might be fun followed by a frustrating third contest, or one or both of the first two games may be downright horrible, with the third being worth sticking around for.

Sometimes you can notice a trend, but other times the factors can vary wildly from game to game. For example, I’ve jumped on with randoms in The Rec and had a really fun game where everyone was moving the ball and we gelled as a team, only to stick around for a second game with the same people and not have the same chemistry or selfless play. Other times, you might get matched up against cheesy gamers, or a full squad that’s jumped into The Rec to feast on randoms. The next game you play might be one of the most fun experiences you’ve ever had on the virtual hardwood, or one that makes you feel like swearing off of online play (or just swearing your head off).

Such is the risk of online competitive play, but again, if you’re talking about knowing when to walk away for the evening, it makes things tricky. A frustrating game may leave you wanting to avenge a loss and chase one last good game before ending a session, or it may turn you off the game right then and there. Conversely, a satisfying victory is a great way to cap off online sessions, but the fun you’ve had can encourage you to stick around. As gamers, I’m sure we’re all familiar with the idea of playing “just one more” level, mission, quest, or game. That’s how I’ve ended up playing one game too many in several online sessions over the past few years. 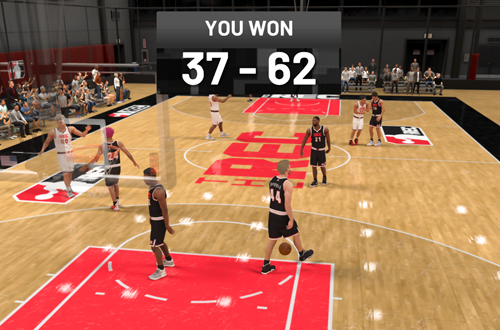 This is obviously by design, and in the best case scenario, it’s all part of the fun. A good game should leave you wanting to play it even more, though developers have obviously taken advantage of those impulses for nefarious purposes. I mentioned “The Gambler”; the whole point of MyTEAM’s recurrent revenue mechanics is to prey on gamers who don’t know when to fold ’em and walk away! Putting all of that aside though, simply chasing that one good game to end an online session on, or being encouraged to play “just one more game”, does leave a sour taste in your mouth if it doesn’t go to plan. At the same time, you do want to cleanse your palate after a loss.

Or alternatively, keep the fun going after a win! If you’ve set aside the time to play a few games, it doesn’t feel right to call it quits after the first contest, win or lose. Even when you nominate a game to be your last of the session, it’s easy enough to be drawn back in for another; especially if you’re playing with friends and someone floats the idea of “I could go for one more”. It takes discipline, disgust, or other duties to avoid that, as most people don’t fancy being a party pooper, and hey, if you’re having fun, why not? That’s usually when “one more game” ends up being one too many, but even when you know that, the lure is still strong. The same goes for trying to “erase” a loss.

At this point of the article, you might think that I’ll dive into some tricks and tips for overcoming this temptation; to stand a better chance of ending online sessions on a high note and not tempting fate with another game, or realising it isn’t going to get much better and calling it quits instead of enduring even more frustration. The fact of the matter is that it’s easier said than done, as there’s no guarantee that your desire to end on a high note will align with your desire to keep playing. Discipline will allow you to walk away at the right time some of the time, but with the way online play in NBA 2K can be fun one game and frustrating the next, you can be caught off-guard. 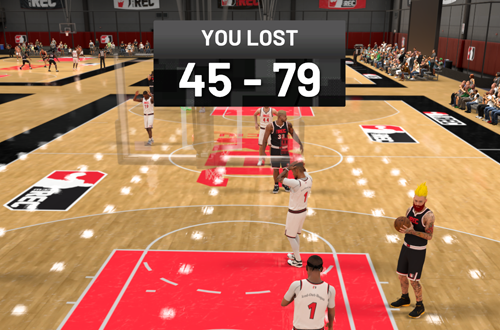 Referring back to that classic Kenny Rogers song, another pearl of wisdom from the titular Gambler is that every hand’s a winner, and every hand’s a loser. In other words, each hand – each game – will be won by someone, which means everyone else loses. To me, that’s the essence of competition. I don’t think anyone enjoys losing (outside of intentionally doing so for whatever reason), but the fact of the matter is that one side will lose, and the other will win. The real disgrace is in not trying, quitting on your team, or being a bad sport. I think that’s something many people lose sight of, in real life as much as NBA 2K. It seems many would prefer not to try, than try and lose.

Again, I will say that you can have games that are either so good that you know you’re unlikely to top it in that session, or so bad that you feel done with the game, and those are the games that makes it easier to fold ’em until next time. It’s the games that aren’t as decisive either way that play on our gamers’ mentality of “just one more”. It’s the victory that’s fun, but it’s early, you’re fired up, and you know you can do even better. It’s the tough, close loss that was competitive enough to take some of the sting out of losing, but you still can’t let the session end like that. It’s the game that put us so close to unlocking a Badge, or levelling up our MyREP, and just one more will get us there.

I think the real trick here is accepting that that’s sometimes how it’s going to go in online sessions of NBA 2K. Sometimes you’ll have an opportunity to end on a high note, and feel comfortable doing so. Some sessions aren’t going to be as fun, and in extreme cases, might be incentive to take a break for a while. Sometimes you’re going to play one game too many, but hopefully it’s because you enjoy the experience and feel compelled to roll the dice on the next game, and maybe even another game after that. You can learn to draw the line as best you can and recognise when it’s not going to be a great session, but ultimately, you can’t expect a perfect ending every time. 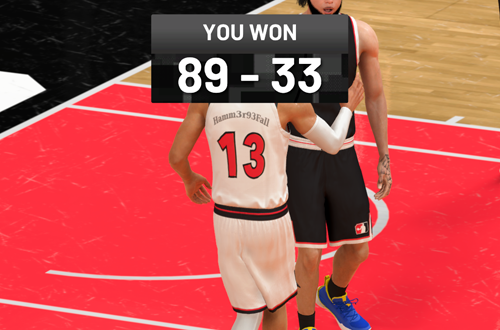 It’s important to keep that in mind. I’d prefer to end my online sessions on a high note and I don’t like to lose, but if they’ve been fun overall, that’s what counts. If it’s been a distraction while I do some cardio, or an opportunity to catch up with friends, it’s been worthwhile jumping online. Yes, there will be times when I play one game too many, but the point is that I’ve felt like playing. For all my gripes with the online scene – and I do stand by them – there still a certain amount of appeal there. Ultimately, when I need to walk away, I do. It might be after one hand too many or I may miss out on a large pot, but then again, you never count your money while you’re sitting at the table.