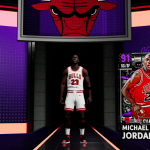 We’re at midcourt, and the ball is about to go up…it’s Monday Tip-Off! Start your week here at the NLSC with a feature that’s dedicated to opinions, commentary, and other fun stuff related to NBA Live, NBA 2K, and other basketball video games. This week, I’m tipping things off with a few thoughts on how generally avoiding the online scene in NBA 2K21 has led to a more positive experience.

Don’t get me wrong; NBA 2K21 has its issues on Current Gen and Next Gen, though especially the former. It has its frustrating moments, and that’s when I usually end up putting it aside. However, I have honestly been enjoying the Next Gen version enough to want to play it regularly. Beyond a handful of improvements and appealing content, the main reason I’m having a better time on the virtual hardwood as of late is that for the most part, I’m not playing online. That means no more organising online sessions, or jumping into The Rec to play with randoms.

That’s not to say that I’m completely eschewing the online scene. MyTEAM’s Agenda does steer me in that direction in the quest to gain XP and level up, but other than that, I don’t go out of my way to play online. Again, there are some frustrations that you will encounter because of the legacy issues in NBA 2K21, but by avoiding online play, I’m at least dodging the ones that are user-driven and self-inflicted. It’s felt so refreshing to dive into other experiences, especially ones that I haven’t had enough time for in previous games thanks to MyCAREER and its connected modes. Of course, while I do feel fine about my recent gaming habits, it’s also unfortunate.

Before I get into that, let’s revisit the issues with NBA 2K’s online scene. Despite the online modes in NBA 2K having so much depth and some really good ideas, the scene simply isn’t as fun as it could and should be. There’s the lack of matchmaking, which combined with gatekeeping measures, results in frustrating games unless you’re part of a full squad. The concept of meeting new gamers and forming squads would have merit if the games hadn’t cultivated such a toxic, elitist atmosphere. Lag and server performance is still an issue. There’s a lack of balance, and an abundance of pay-for-advantage mechanics that influence the playing field. I could go on and on here. 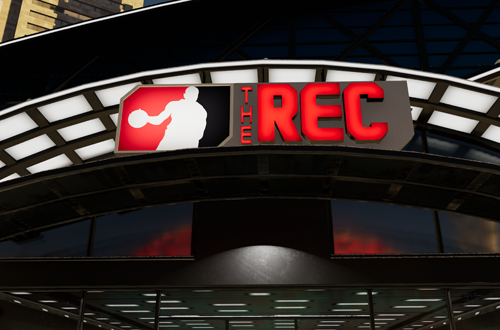 The bottom line is that NBA 2K’s online scene is lacking in functionality, friendliness, and fortitude. To that end, however, if you completely avoid online play in NBA 2K, you obviously don’t deal with any of that. Sure, the AI has some cheesy tricks of its own, and as I noted, there are lingering issues with offline game balance, physics, and other mechanics. There are times when those issues become overwhelming, and I need to take a break. The difference is that the single player experience works well enough that I’ve been inclined to pick it up once again, because the ratio of fun to frustration is still favourable. That hasn’t been the case in modes such as The Rec.

Indeed, that fun to frustration ratio has really taken a turn for the worse this year. I was mostly playing in The Rec in NBA 2K21 Current Gen as I’m over the NBA side of MyCAREER, and it was awful. Playing with randoms is always going to be hit and miss, but the standard of play was worse than ever. I’ve always refused to dashboard in The Rec, but I couldn’t finish the last few games I played on Current Gen. While some of my frustration did come from issues with design and mechanics, most of it was due to how people were playing. Unfortunately, there’s no incentive to change. The rewards for good play, and the punishments for poor play, are both insufficient.

That’s simply not a concern when it’s just me and the CPU. Since I’m not building up a player to use online, I don’t have to sink hours into MyCAREER, or worry about the meta. My build probably will perform well enough if I take it online, but if it doesn’t, who cares? I’m quite happy to avoid that scene. Not only that, but after playing all four years in college and seeing that branch of The Long Shadow’s story through to the end, I’m happy to put MyCAREER aside. There’s no need to keep grinding so that I can level up and be competitive in Playground, Pro-Am, or Rec play. That frees up more time to actually play MyTEAM, and even start a MyNBA game with the Bulls. 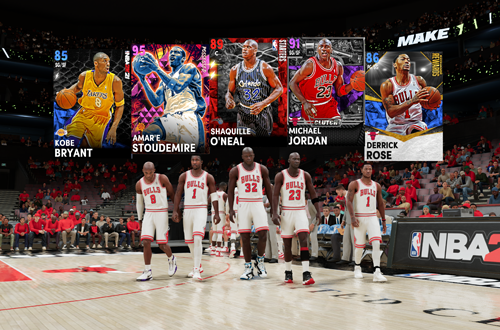 When an interest in the connected modes demanded that I dedicate all of my time to MyCAREER to improve my build, I could rarely dabble in MyTEAM. I was able to amass decent collections by working the Auction House, entering Locker Codes, and playing a game here or there. For the most part though, my collections in NBA 2K19 and NBA 2K20 went to waste, because MyCAREER and its connected modes were monopolising my free time. In NBA 2K21, I’ve actually been able to enjoy what’s on offer in MyTEAM; on PlayStation 4, PlayStation 5, and PC, no less. I naturally have some criticisms of the mode, but the freshness of the experience counts for a lot.

To hear strictly online gamers tell it, this isn’t the way it’s supposed to be. The online modes are supposed to be the fresh, dynamic experiences in gaming, because you’re facing new people with their own strategies and skill levels. There’s less predictability and more challenge compared to squaring off against the AI. I would say that there’s some truth to that, but unpredictability swings both ways. Offline play is generally a consistent experience, whereas online play tends towards the extremes. Either you’ll have a great time, or it’ll be a painfully unpleasant outing on the virtual hardwood or blacktop. When it’s bad game after bad game, online ends up feeling very stale, too.

However, even if the quality of online play hadn’t plummeted to new depths in NBA 2K21, I think I’d be enjoying myself just as much. A change is as good as a holiday, as the saying goes, and I’ve wanted to move away from MyCAREER for a few years now. I grew up playing season and franchise modes, after all, and have also had quite a bit of fun with Ultimate Team in a couple of NBA Live games on PlayStation 4. As such, returning to modes that don’t involve a long grind to level up a player, after years of playing MyCAREER and its connected experiences, is both refreshing and invitingly familiar. In the end, dissatisfaction was what I needed to make a change. 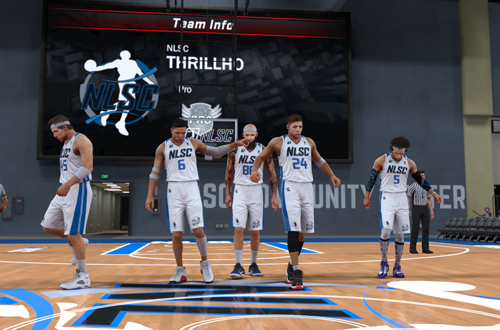 That’s rather unfortunate though, as I have had genuinely enjoyable experiences with The Rec, and especially 2K Pro-Am when the NLSC squad was playing regularly. I’d say that the scene peaked in NBA 2K17, when our squad played over 500 games in the span of a year. It would’ve been nice if I’d been able to move on from the online scene simply because I felt fulfilled and ready to do so, rather than so disgusted that I feel no inclination to take part in it again. Sometimes that’s the way it goes, of course, and it did ultimately allow me to move on to other modes. In that respect, I’d say that there’s definitely a proverbial silver lining to being driven away from the whole scene.

It also means that I don’t miss it all that much. I miss the camaraderie and fun of the NLSC Pro-Am sessions, but changes to the mode put an end to that. Jumping on with randoms was a good time when the fun to frustration ratio was more favourable, but the scene is far too toxic now. More importantly, what I’m playing now is holding my interest and attention. I’ve been doing a bit of everything in MyTEAM, and while I don’t have the best squad around, it’s more than sufficient to be competitive offline, without spending a single cent. The Long Shadow was a good story – perhaps the best of any MyCAREER tale – and now I have more time for a MyNBA game as well.

As far as playing the occasional online game in MyTEAM for Agenda XP, it’s seldom a good time, but I approach those games with a certain amount of detachment. I try to win, of course, but as long as I can hit the statistical goal and tally a completed game for the requisite XP, I’m satisfied. It’s also very different to online team play with randoms, as I’m not relying on four other gamers to play competently and unselfishly. As such, there’s freshness there as well. I’d probably feel similar frustration if I were playing MyTEAM’s online modes primarily or exclusively, but they’re essentially a break from Triple Threat Offline, Domination, and Challenges, so I can endure them. 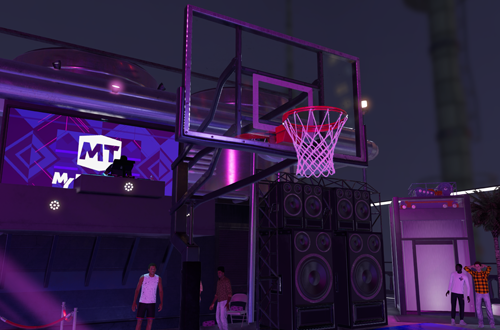 Tribalism ensures that online and offline gamers will never see eye to eye, even though many of us have split our time between both in NBA 2K. There’s certainly appeal in the online scene. I didn’t see it for many years, but after getting involved, I came to enjoy making it a part of my basketball gaming. Unfortunately, it relies too heavily on other people to make it a consistently enjoyable experience. As I’ve said before, we share blame here, but certain aspects of the games encourage elitism, gatekeeping, poor sportsmanship, and general toxicity. If you find appeal in single player, why endure so many rough online games to finally have one that doesn’t suck?

I’d like to see the online scene improve. It’s something I wouldn’t mind jumping into from time to time if it were better, and for those who are still playing it, I obviously believe that they should have the best experience possible. We buy these games every year, and some people dump a lot of additional cash into them by way of buying VC, so we should be enjoying ourselves and getting our money’s worth. Despite my criticisms and frustration with some legacy issues, I have been getting sufficient enjoyment out of NBA 2K21 across the platforms I own it on. It all came down to making it a solo experience once more. I’ve been playing less online, and I feel fine.