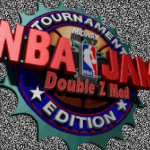 An exciting new release by eskayelle has been added to our Downloads section: the Double Z Mod for the Super Nintendo version of NBA Jam Tournament Edition! The mod is an ultimate 90s update for NBA Jam TE on SNES, adding several new players and teams. An overview of the key features is as follows:

Download it here, and check out the release topic here for further information, support, and previews. eskayelle is also working on an NBA Jam 2K20 TE mod which will update the game with current season rosters, similar to the NBA Jam 2K17 mod that was released a couple of years ago. You can find more information on that project here.

How I can mode my NBA Jam cartridge for the SNES?

You can’t. These ROM hacks are only playable through emulators.

eskayelle has more information on all that stuff in his release topic, which is linked up in the bulletin.