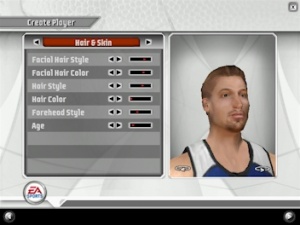 A staple of most gaming genres, Create-a-Player (often simply labelled Create Player in-game) was first implemented in the NBA Live series in NBA Live 96. Throughout the years it has seen slight upgrades with the ability to edit a wider range of player attributes as well as greater control over a player's appearance, down to the shape of individual facial features. Despite the expansion of Create-a-Player several player attributes must still be modified through DBF Editing. Beginning with NBA Live 98, Edit Player was introduced as a companion to Create-a-Player.

Create-a-Player is frequently shortened to CAP, with created players and shared listings of created player attributes being referred to as "CAPs".

Create-a-Player does not allow the user to specify data such as draft information or modify ratings and attributes that are hidden in certain games in the series, although PC users have the option to edit this data via DBF Editing. Certain titles also restrict the number of created players, particularly the console versions. NBA Live 2000 also placed a restriction on ratings so that users wouldn't be able to create unstoppable players, however no other games to date have adopted this restriction.

The Xbox 360 and Playstation 3 versions of NBA Live 09 featured some significant additions to Create-a-Player, including the ability to edit playing styles. Users can choose to assign Signature Shots, Go To Moves and other playing styles to their custom player, mixing and matching from a list of existing NBA players. Unfortunately, users cannot create their own animations or preview animations before assigning them.

Since the NBA Live series was rebooted with NBA Live 14 on PlayStation 4 and Xbox One, Create-a-Player and roster customisation has been absent from the game. It has been a point of contention with most basketball gamers, given the popularity and necessity of roster editing functionality.