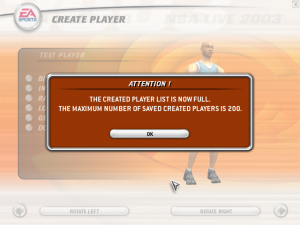 A Create-a-Player limit (also referred to as a CAP limit for short, and as the number of available created player slots) refers to the number of custom players that can be created in a basketball video game that features Create-a-Player functionality. They are encountered when editing the rosters and creating players in various games in the NBA Live and NBA 2K series. The number of available created player slots varies from game to game, and across different platforms.

The limits on the number of created players are the result of memory and storage limitations. PC releases have generally had a higher number of created player slots, while older console releases offered fewer slots. Certain NBA Live releases on Nintendo 64 and the original PlayStation also featured the ability to edit original players, at the cost of a created player slot. This method and limitation has not been utilised by any PC releases, nor any console releases beginning with the PlayStation 2, due to different file formats, larger storage space, and more powerful hardware.

Some basketball games will place further restrictions on individual created players, including their years pro (usually according to their age), ratings, and in some cases, physical attributes.