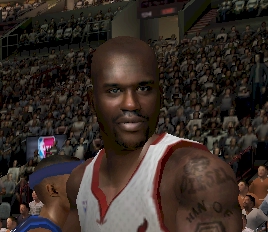 Cyberface is a term used to describe the face art for players in NBA Live and NBA 2K. In the NBA Live series, cyberfaces were first utilised in NBA Live 98, allowing players to resemble their real life counterparts with greater facial details. Since then, cyberface patches have been produced to update the appearance of default players as well as adding original faces for missing players who have been created.

When cyberfaces were first used in NBA Live, the game utilised up to eight different headshape models to suit each player in the league and their respective face art, however later games would utilise a unique headshape for every player, allowing them to more closely resemble their real life counterpart. Selecting an appropriate headshape file when creating a custom cyberface is important as choosing an inappropriate model will distort the face.

Faces are assigned to players using the PLAYERPKG field in players.dbf. The name of the art file must match the value specified in the database, otherwise the art file will not be loading resulting in pink heads.