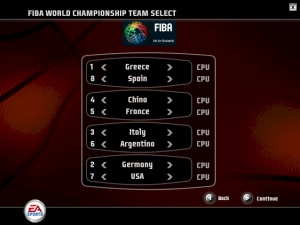 The FIBA World Championship Mode is a tournament mode that was introduced in NBA Live 08 after EA Sports acquired the rights to include FIBA teams in the NBA Live series. Eight national teams were included in NBA Live 08: USA, Argentina, Spain, Greece, China, Germany, France and Italy. A producer blog indicated that the limited roster of national teams was due to the FIBA license being finalised late in production, hinting that future releases will include a wider range of FIBA teams. The roster of FIBA teams would increase to 24 in NBA Live 09.

The teams in NBA Live 08 feature rosters from the 2006 World Championship, though generic art is used for many of the international players who do not currently play in the NBA. Users may customise game settings similar to the traditional game modes including quarter length, simulation injuries and the ability to modify CPU controlled rosters. NBA Live 09 would expand on the mode with a proper tournament structure and correct FIBA court dimensions.

In an interview with the NLSC, line producer Brian Ullrich confirmed that the inclusion of FIBA teams is primarily based on the FIBA World Rankings but adjustments are made to ensure that certain territories are adequately covered. New Zealand is a noteworthy exclusion from the first two games to feature the FIBA World Championship.