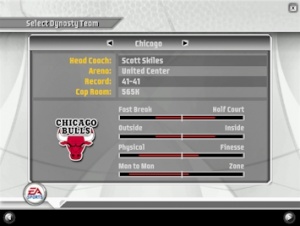 Dynasty Mode is NBA Live's multiseason mode that allows players to take control of an NBA franchise for 25 years, during which time they must perform various tasks that emulate the experience of an NBA head coach and general manager, such as making trades and signings, scouting and drafting rookies, co-ordinating team practices and hiring staff in addition to playing (or simulating) their team's games. Dynasty Mode was previously branded as Franchise Mode in NBA Live 2000 up until NBA Live 2003.

GM Mode was introduced in NBA Live 98 as an alternative to the regular Season Mode. It offered players the ability to draft their own fantasy teams from the current pool of NBA players and compete in a fictional NBA. The mode was fairly limited and did not boast any of the additional roster or front office management options that later games would introduce.

The following year, NBA Live 99 introduced Multiseason Mode, an expansion of the popular Season Mode that allowed the user to play ten NBA seasons. One of the key features of Multiseason Mode was Player Progression, with young players developing into better players and veteran players declining as they aged. However, the lack of the NBA Draft meant that although players aged and their ratings improved or declined, no new players were introduced to the league.

Multiseason Mode also featured trades between CPU teams and CPU trade logic that would reject a deal that was deemed to be unfair. However, the user could choose to override this feature and the CPU did not always make intelligent deals often assembling teams that were too weak at a certain position or comprised mostly of players at a single position (quite often centres).

NBA Live 2000 was the first game to feature Franchise Mode, giving players the opportunity to take control of an NBA team - or all 29 teams if desired - for 25 years. It also added greatly desired features such as player salaries (although these were generic and based on a points system rather than real NBA salaries) complete with a simplified version of the salary cap for free agency and trades, an annual rookie draft featuring generated rookie players, player progression and player retirements. Franchise Mode was instantly popular, surpassing Season Mode as the major mode of play. Over the next couple of years Franchise Mode would see new additions such as the ability to select new teams (or deselect teams) upon advancing to the next season and three team trades (NBA Live 2001 only).

Beginning with NBA Live 2004, Franchise Mode was rebranded Dynasty Mode to coincide with various new features. Among those features was the ability to trade draft picks, cutscenes after events such as trades and signings, retired jersey numbers and Dynasty Extras, which when earned allowed users to train their team or make purchases (such as a new locker room or team plane) to benefit their team. Many users had mixed feelings about the merits of Dynasty Extras. On one hand they afforded more depth to Dynasty Mode with the ability to train players and improve team, however the general feeling was that the extras were not necessarily realistic. The method of accumulating Dynasty Points (the currency used to buy Dynasty Extras) was also criticised as it often meant playing unrealistically to reach certain goals, which also punished players who preferred to sim games.

Dynasty Extras were phased out in favour of team staff, hired during the offseason prior to the first season in Dynasty Mode. With a staff including a trainer, assistant coach, scout and as of NBA Live 07 an assistant head coach, players could now manage training sessions, injuries and other aspects without first having to earn Dynasty Points, instead giving players a budget and allowing them to sign staff similar to free agent players.

One of the main differences between Dynasty Mode and Franchise Mode is the ability to control multiple teams. While this was allowed in Franchise Mode, players may only assume control of one team in Dynasty Mode. To compensate for this, users are offered a chance at assuming control of a new team during the course of a Dynasty game depending on the success of their former team. The likelihood of receiving an offer to control another team can be measured by the GM Rating, which offers a rating of the user's performance as a GM according to factors such as team success and the regularity of performing tasks such as scouting rookies and training players. A GM Rating of 100 will almost guarantee an offer from another team during the upcoming offseason.

Traditionally players have been able to select shorter schedules in Franchise and Dynasty Mode, however NBA Live 07 did not allow this option due to the newly implemented season fatigue feature which was designed to suit a realistic 82 game schedule. NBA Live 07 also introduced team rotations, a rumour mill and off-day/event planning in the form of the assistant head coach. Reception was mixed as most players liked the added depth but disliked the influence the assistant head coach had over aspects such as lineups and the rotations.

The Xbox 360 and Playstation 3 versions of NBA Live 08 featured an updated Dynasty Mode with a new approach described by EA Sports as a "push" system. Unlike previous incarnations of Dynasty Mode where the user had to enter the various menus and "pull" certain Dynasty features out of the game, the push system presented users with certain tasks in the forum of pop-up boxes that could be disabled if the user wished to ignore/automate certain tasks such as rookie scouting and training. These notifications also included advice from the virtual team owner suggesting the team's direction (for example making the Playoffs, making a serious run at the championship or rebuilding) which can also be disabled. Some new features such as a free agent signing mini-game, a deeper simulation intervention system, Dynasty scenarios and the CPU making counter offers on trade proposals were also added and were well received by most players.

Unfortunately for PC users, these improvements were not implemented in the PC version which retained the old PDA-based system. Various Dynasty Mode bugs in NBA Live 08 PC were also amongst the common complaints.

Although Dynasty Mode remains the most popular mode of play in the NBA Live series, its popularity has also placed it under heavy scrutiny by the fanbase. Dynasty Mode generally boasts the most wishes and suggestions in the annual Wishlist next to gameplay as most fans are keen to say further improvements and greater depth. The most common criticism is perhaps the game's stats engine which determines simulated performance. With the removal of DSTATS player statistics are based entirely on player ratings which does not always lead to realistic or desirable results. Other common criticisms generally concern trade logic, the linear nature of offseason tasks and lack of expanded front office duties similar to those offered in Madden's Dynasty Mode.

NBA Live 08 PC's Dynasty Mode was heavily criticised for lacking most of the features introduced in the Xbox 360/Playstation 3 version as well as several bugs including problematic simulated stats that resulted in several players averaging over 30 ppg, big men leading the league in three point shooting and assists as well as blocking and stealing statistics that were far too low.

Despite the critcism it would appear that Dynasty Mode remains a mode that a lot of NBA Live gamers are interested in, and want to see improve.

Dynasty Mode in NBA Live 10 was generally met with disappointment, due to unrealistic simulated stats, the lack of the traditional Reorder Rosters screen, several non-functioning features and a general lack of improvement, expansion or enhancement.

Since the NBA Live series was rebooted with NBA Live 14, Dynasty Mode has been criticised for lacking various features, notably the transactions page, the ability to edit player jersey numbers, and some of the features introduced with the revamp back in NBA Live 08. NBA Live 15 did see the return of Sim Intervention, however as of NBA Live 16, Dynasty enthusiasts are still waiting for the mode to be improved and expanded upon.