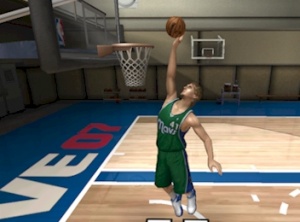 Freestyle Air furthered the concept of Freestyle Control by allowing users to not only adjust their shot in midair to elude a defender but also choose choose whether to grab a rebound, attempt a tip-in or try for a putback dunk when crashing the offensive boards.

Pressing the Dunk/Layup1 in the middle of a dunk or layup attempt will force the player to alter his attempt. Tough defense can sometimes force an automatic adjustment, though the likelihood of this can be increased or decreased through the sliders.

1 In NBA Live 07 this refers to the Layup button