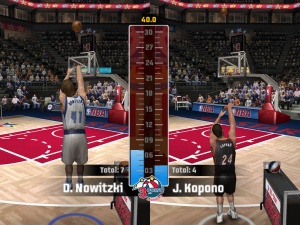 The Three Point Showdown is simply a single round of the Three Point Shootout between two players. The Slam Dunk Showdown features one untimed single round where two competing players must perform as many dunks as possible to earn a target score. Points are awarded for successful dunks with more complex dunks earning a higher score. As in the regular dunk contest, successful dunks that are perfectly timed will earn a higher score than dunks that are successful but thrown down too early or too late. Points are deducted for missed dunks, missed alley-oops or dunks that are repeated.