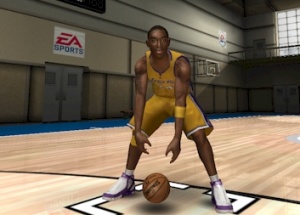 Freestyle Control is a control method that utilises a dual analog controller (specifically the right analog stick) to perform specific moves on demand, first introduced in NBA Live 2003. Since its inception the concept has been expanded into different areas of complete player control including Freestyle Air and Freestyle Superstars. Freestyle Control is intended to give users total control over the moves their players execute on the court but has been criticised in the past for being too powerful and at times unrealistic.

Freestyle has since been replaced by the similar Quick Strike Ankle Breakers system.

NBA Live 2004 introduced the Pro Hop and Power Dribble/Drop Step moves which were assigned to an action button up until NBA Live 07 when they became integrated with the right analog stick. The Pro Hop move allows plays to perform a jump stop before attempting a dunk, layup or jumpshot while the Power Dribble/Drop Step move is effective in making strong moves and eluding defenders in the paint.

The concept of Freestyle Control has continued to expand each year with features such as Freestyle Air and Freestyle Superstars being added in NBA Live 2005 and NBA Live 06 respectively.

When Freestyle Control was first introduced in NBA Live 2003 it was too powerful, allowing the CPU and human players to get to the basket too easily resulting in up-tempo arcade-style gameplay that was met with disapproval by most NBA Live fans. NBA Live 2004 successfully toned down Freestyle Control and since then dribbling moves tend to be in balance, though their effectiveness can be increased or decreased through slider tweaks. Most players seem to enjoy the concept of total player control but have been critical of recent additions such as Freestyle Superstars, describing it as being too overpowering.