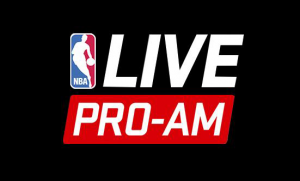 LIVE Pro-Am is a game mode introduced in NBA Live 16, featuring both single player and multiplayer gameplay. It is comprised of two modes: LIVE Run, which is similar to its predecessor in NBA Live 10, involves up to ten gamers on ten different consoles, competing in pickup games to 21 using their Rising Star players; and Summer Circuit, in which up to five players squad up to take on teams of NBA players using their Rising Star players, while also trying to complete certain objectives. The games take place in famous basketball venues from around the United States and Canada.

Similar to Rising Star, LIVE Pro-Am games feature a teammate grade, which scores your performance based on your stats, decision making, and how well you gel with your teammates.

In Summer Circuit, each venue has different squads of NBA players, all of whom have some kind of connection to the venue or city it's located in. There are five games per venue, each with their own opponents and objectives. Gamers use their Rising Star players, and can earn RP to buy gear and accessories, and SP to upgrade their players. Unlike LIVE Run, Summer Circuit can be played solo, with random CPU controlled teammates being assigned in place of other users. Venues also progressively increase in difficulty.

Contrary to adidas Live Run in NBA Live 10, gamers do not control NBA players in LIVE Run. Instead they use their Rising Star players, with four to ten users to a game. This way, LIVE Run is still playable if less than ten users are available, as the CPU will control the remaining players.

All games in LIVE Pro-Am are played under a variation of streetball rules, with no fouls, and baskets counting for two and three points as normal. The winner is the first team to 21, however there is no "win by two" rule, meaning a team trailing 20-18 can win on a three-pointer.

The following venues are available in Summer Circuit and LIVE Run in NBA Live 16: