NBA 2K18 is an NBA basketball simulation video game by 2K Sports. It is the nineteenth installment of the NBA 2K series, released September 19th, 2017 (September 15th for pre-order customers) for PC, PlayStation 4, Xbox One, PlayStation 3, Xbox 360, and Nintendo Switch. Kyrie Irving is featured on the main cover, while the special Legend Edition cover player is Shaquille O'Neal. It is the direct sequel to NBA 2K17, and was followed by NBA 2K19.

NBA 2K18 is a sim-oriented basketball video game, retaining modes such as MyCAREER, MyGM, MyLEAGUE, MyTEAM, MyPARK, and 2K Pro-Am, as well as gameplay elements such as the Pro Stick. A new hub world for MyCAREER named The Neighborhood was also introduced. The current gen version of the game is built on the Flowtech engine. It is the first NBA 2K game released for the Nintendo Switch, and the first game in the series to be released on a Nintendo console since NBA 2K13 for the Wii U.

On May 8th 2017, it was revealed that Shaquille O'Neal would be featured on the cover of the Legend Edition, and Legend Edition Gold. The Legend Edition features a photo of Shaquille O'Neal from his days with the Miami Heat, whereas the Legend Edition Gold features a photo of him from his time with the Los Angeles Lakers. Both editions contain pre-order bonuses that celebrate his career. On June 1st, ahead of his Cleveland Cavaliers facing the Golden State Warriors for the third straight season, Kyrie Irving was revealed as the main cover player for NBA 2K18. Following his trade to the Boston Celtics, a new cover was designed and distributed in later copies. A new title screen featuring the updated cover art was also patched in at launch. 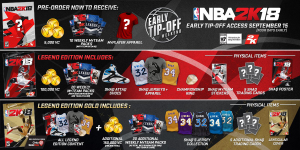 NBA 2K18 was generally well-received by critics, holding Metacritic scores of 80 (PlayStation 4), 85 (Xbox One), and 87 (PC). The Switch version had more of a mixed reception from critics, with a Metacritic score of 74. Among basketball gamers, the reception was far less favourable, in part due to the heavy emphasis on Virtual Currency and microtransactions. User scores on Metacritic were as low as 1.6 (PC and X1), 1.7 (PS4), and 4.4 (Switch). In addition to what many gamers felt were greedy tactics regarding VC, legacy issues and problems with the new motion engine were also cited as negatives, though these elements were not universally panned in user reviews and reactions.

Despite the backlash, NBA 2K18 became the best-selling game in franchise history, with over 10 million copies sold. The game also showed an increase in "recurrent revenue" from microtransactions over NBA 2K17.