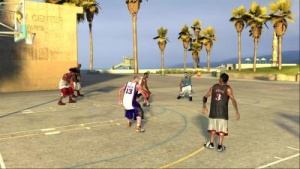 NBA Street is a series of arcade-style streetball games produced by EA Sports BIG and developed by EA Canada. Seen by some as a spiritual successor to Acclaim's popular NBA Jam series of the 90s, NBA Street focuses less on realism with three-on-three matchups featuring truly gravity-defying dunks thanks to almost superhuman abilities as opposed to EA Sports' NBA Live series which has traditionally attempted to emulate the NBA experience in a more realistic fashion. Unlike NBA Jam however, NBA Street does not represent the National Basketball Association in the form of an arcade game but rather represents streetball while featuring NBA players and its own tournament/career mode structure.

Games in the series[edit]

Because NBA Street follows streetball rules, players can execute dribbling moves and tricks that would normally be a violation in organised basketball. The games themselves are won (or lost) when one team reaches a target score, usually 21. Regular field goals count for one point while shots from beyond the three point line count as two points. Later games have also added winning rules such as lower scores (first to 7, first to 15 etc) and the first team to lead by a certain number of points. Certain games may also be "Dunks only" or "Shots only"; any baskets scored on disallowed field goals will not count and the ball is turned over to the opposition.

Performing trick moves and scoring baskets fills the Trick Meter. When full, players are able to perform a Gamebreaker which reduces the opponent's score by the equivalent amount of points scored on the Gamebreaker basket. In later games such NBA Street: Homecourt, performing several trick moves after achieving Gamebreaker status and/or completing the play with a basket that scores two points (either a three point field goal or a double dunk) will allow the user to score even more points on a single possession.

Season/Career Mode generally consists of taking control of a barnstorming streetball team and challenging local teams in each town or city. In the original NBA Street, NBA teams were represented with fictional streetball legends serving as a kind of boss in between challenging real players, with the ultimate goal of defeating a team led by Michael Jordan in Rucker Parker. This concept has been tweaked throughout the series eventually leading to the hometown concept utilised in NBA Street: Homecourt, where players represent their hometowns on realistic renderings of the streetcourts they played on growing up. The Homecourt Challenge consists of the user creating a player and putting their hometown on the map by means of a cross-country barnstorming challenge.

The GameCube version of NBA Street V3 features Mario, Luigi and Peach from the Mario games.

The release of NBA Street has popularised Street Mods for NBA Live. Although these mods cannot completely emulate the NBA Street game engine, patchers have been able to make impressive replicas of the courts and jerseys featured in the Street series as well as capturing a more arcadelike style of play through aiact.viv editing.