From NLSC Wiki
(Redirected from Playoffs)
Jump to: navigation, search 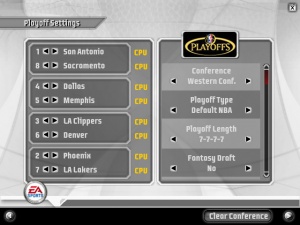 Playoffs Mode allows the user to hold the NBA Playoffs at any time without first playing through the regular season in Season or Dynasty Mode. Users can create their own Playoff tree and series format (the default being the NBA's 7-7-7-7 format) as well as take control of multiple teams if they wish. As with Season and Dynasty Mode, the user can choose to simulate (and intervene) if desired. While it is not as popular as other game modes, it is useful for staging tournaments or jumping straight into the postseason, as some players feel like doing when the real NBA Playoffs begin. It has remained relatively unchanged throughout the series with the most noticeable updates being aesthetic.

By default, the brackets reflect the previous season's playoff participants and seedings. Although updating the Playoff Tree can be done quickly and easily from within the game, it is possible to edit the default bracket through DBF editing.

A standalone Playoffs Mode was not available in NBA Live for the current generation of consoles until NBA Live 10, where it makes a welcome return. As in the past, users are able to replay the previous season's Playoffs or customise the brackets to create custom matchups. Playoffs Mode in NBA Live 10 also benefits from an upgrade to presentation including artwork on the court and crowd responsiveness and chants.

When the NBA Live series was rebooted with NBA Live 14, a standalone Playoffs mode was once against absent. As of NBA Live 16, it has not yet returned. However, the Playoff Atmosphere setting does remain for exhibition games, and Playoff games that occur in Dynasty Mode and Rising Star. 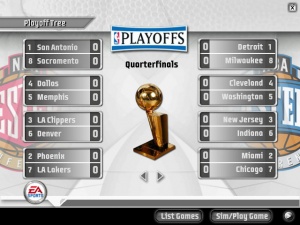 The Playoff Tree in NBA Live 07
Retrieved from "https://nba-live.com/nbalivewiki/index.php?title=Playoffs_Mode&oldid=6748"
Categories: