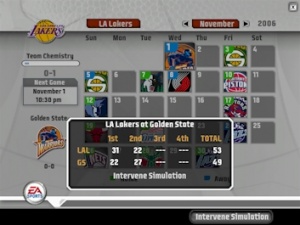 Simulation Intervention (often shortened to Sim Intervention) is a simulation function introduced in NBA Live 2005, intended to give users more control over simulating games in Dynasty, Season and Playoffs Mode by letting them intervene in the simulation, and begin play from a later point in the game. Because it slows down the process of simulating games by displaying quarter-by-quarter scores, it can be disabled if the user does not wish to use the intervention feature.

After being removed following NBA Live 10, the feature was reintroduced to Dynasty Mode in NBA Live 15.

When Simulation Intervention is in use, any game that is simulated will be represented by a dialog box that displays quarter-by-quarter scores. The user is presented with the option of intervening at the beginning of a quarter. Once the user has chosen to intervene however, they must play the game to the end or exit losing all progress as there is no facility to resume simulation. When simulation is intervened, the CPU will randomly decide which team won the opening tip (and thus own possession at the beginning of the quarter in which the user entered the game) as well as simulating individual player and team stats up until that point, however quarter-by-quarter stats will not be available in the stats menus.

The greatest advantage of Simulation Intervention is that it allows players who want to play 12 minute quarters and 82 game seasons but do not have the time to do so take part in the action while still simulating a significant portion of the season. It also provides players the ability to jump in and try to turn the tide of a game that is not going in their favour if the game is of particular significance or the player simply wants a challenge.

Simulation Intervention has featured a couple of prominent bugs in the past, namely the use of the set quarter length if the game is intervened in an overtime period (rather than being five minutes as in real life) and players that have been assigned six personal fouls in the course of simulating the game statistics being able to play until they pick up their seventh personal foul.

Beginning with the Xbox 360 and Playstation 3 versions of NBA Live 08, games are not simulated quarter by quarter but rather play by-play with the user being able to jump in at any time and take control of the game. Users can set the speed of the play-by-play action to Slow, Normal or Fast and completely disable intervention as before. The introduction of Dynasty Scenarios also provides a chance for players to intervene when there are special events, such as slim leads in the final minutes or a player about to achieve a statistical milestone.

This expanded, play-by-play simulation was reintroduced in NBA Live 15.