After years of anticipation, the dreams of the NBA Live community came true in NBA Live 2005 with the addition of All-Star Weekend. A perennial Wishlist item, the Slam Dunk Contest had only been utilized in very few video games, usually without much success. It features the commentary of Ernie Johnson and Kenny Smith in NBA Live 2005 and NBA Live 06, with Kenny Smith being replaced by Greg Anthony in NBA Live 07 onwards after signing a deal with Take-Two to appear in the NBA 2K series.

After selecting from a field of four players, each player has 24 seconds to complete a dunk using one of the face buttons for a different take-off (or gather) as well as another face button for the desired finish. Additionally, two trigger modifiers allow for further variation in the dunks. If a dunk is attempted and missed, the player is allowed to re-try the dunk. If the player does not make an attempt on the take-off, they are allowed to come down and try again until all the time has been used up. Players are allowed to alley-oop it to themselves with various tosses, executed with the right analog stick. 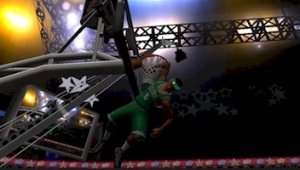 "Honey Dip" in the Dunk Contest