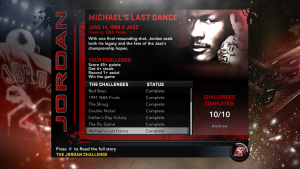 The Jordan Challenge is a game mode featured in NBA 2K11. In the mode, users are able to take control of ten different versions of Michael Jordan and his teammates and play against historical opponents while completing specific challenges related to some of Jordan's most memorable games. Each version of Michael Jordan features his appropriate appearance and skillset for the season it represents with the other historical players also featuring their own signature shots, moves and tendencies. The historical teams also make use of era-specific playbooks and custom commentary will be available.

The Challenge is made up of the following games/tasks:

One-liner: Jordan made his mark with this 63 point playoff game against a heavily favored Celtics team.

One-liner: This time Jordan gets the win by dropping 69 points and putting a dent in the Cavaliers' playoff plans.

One-liner: Jordan and Dominique Wilkins face off in some of the all-time greatest scoring performances of the era.

One-liner: Jordan showed the Pistons and the world that no defensive strategy could stop him for long.

One-liner: Jordan silenced the doubters by coming back from a game one embarrassment to thrash the Lakers in these Finals.

One-liner: Just to prove a point, Jordan sets the tone for the series by dominating the first half of this first Finals game.

One-liner: After a stint with the bat, Jordan returns to New York to tear up the Knicks for 55 points and an unforgettable pass.

One-liner: Michael ran the table over the entire league but this fourth title would prove to be just as special as his first.

One-liner: A very ill Jordan still manages to both dominate the game and hit the winning shot in the last seconds of the game.

One-liner: With one final resounding shot, Jordan seals both his legacy and the fate of the Jazz's championship hopes.

As a result of the inclusion of The Jordan Challenge, the following teams will be immediately playable in all modes in NBA 2K11. Due to licensing issues, most teams only include real players in their starting lineups with generic fictional players rounding out the benches.

Users may select the difficulty when playing games in the Jordan Challenge, however the quarter length is restricted to eight minutes. This has drawn criticism from some players who feel that the shorter quarter lengths do not allow enough time to reach some of the stats required to beat certain challenges.

Successfully completing the Jordan Challenge unlocks a new career mode, MJ: Creating a Legend. The mode can also be unlocked prior to completing all the challenges via a cheat code.

Screenshots of Michael Jordan in action in NBA 2K11: