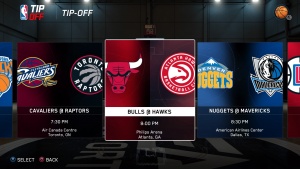 Tip-Off (formerly Exhibition Mode, Play Now, and Play Game) is the name given to the single game exhibition mode in NBA Live. It allows users to play an exhibition game between any two teams of their choosing, with no stats or records being kept. The mode is generally used by players to acclimatise to a new NBA Live title before beginning a game in one of the depth modes, particularly if they wish to tweak the sliders for realistic gameplay. From NBA Live 2005 to NBA Live 09, the All-Star Weekend was also accessible as a standalone exhibition mode in addition to being included in the schedule in Season and Dynasty Mode.

In NBA Live 16, users can choose to set up a custom game with the teams of their choice, or during the 2016 season, play the games that are scheduled for the current day.