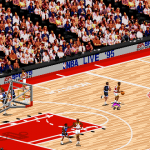 This is Wayback Wednesday, your midweek blast from the past! In this feature, we dig into the archives, look back at the history of basketball gaming, and indulge in some nostalgia. Check in every Wednesday for retrospectives and other features on older versions of NBA Live, NBA 2K, and old school basketball video games in general. You’ll also find old NLSC editorials re-published with added commentary, and other flashback content. This week, I’m taking a look back at the iconic isometric camera angle in NBA Live.

Camera angles have a significant impact on the quality of the gameplay experience across a wide variety of genres. As many titles in the early days of 3D would end up demonstrating, poorly designed camera angles and movement resulted in artificial difficulty, either by obscuring the player’s view at inopportune moments, or simply by not providing a suitable view of the action at any time. In sports video games, a bad camera angle made it a lot easier to step out of bounds, and it was harder to determine where players were in relation to each other and the field of play.

Most early basketball video games used a similar sideline camera angle, which was fine for the time, but did have a few drawbacks. EA Sports would change things up with the release of NBA Live 95, when they switched to an isometric camera angle. Not only does it remain a distinctive look that gamers found appealing, it also made the gameplay experience far more enjoyable. Let’s take a look back…way back…