Welcome to this week’s edition of The Friday Five! The Friday Five is a feature that I post every Friday in which I give my thoughts on a topic that’s related to NBA Live, NBA 2K, and other basketball video games, as well as the real NBA, and other areas of interest to our community. The feature is presented as either a list of five items, or in the form of a Top 5 countdown. This week’s Five lists some of the pettiest moments we’ve seen in basketball gaming.

Is it fair to say that some of the most talented and creative people are also among the pettiest? As someone who grew up reading Roald Dahl’s books, such as Charlie and the Chocolate Factory, Danny, Champion of the World, The Twits, and other classics, I’d have to say yes. Comparing the stories to Dahl’s autobiographical works, Boy and Going Solo, it’s obvious that he based many of his villains on people that he’d met and didn’t care for. In Danny, Champion of the World, he flat out named Danny’s abusive teacher after one of his own schoolmasters whom he loathed (I’d say quite rightfully).

With that in mind, it’s probably fair to say that spite is a driving influence in a lot of people’s creative process. The amount of recording artists who have released songs written about an ex – famous or otherwise – also stands as a good example here. As a creative medium in which there’s competition, video games likewise invite some petty potshots and snarky slams. With there once being a heated rivalry between NBA Live and NBA 2K, both EA Sports and Visual Concepts have been guilty of pettiness. On the other hand, pettiness has also resulted in some amusing Easter eggs and design choices. Without further ado, here are five of the pettiest moments in virtual hoops! 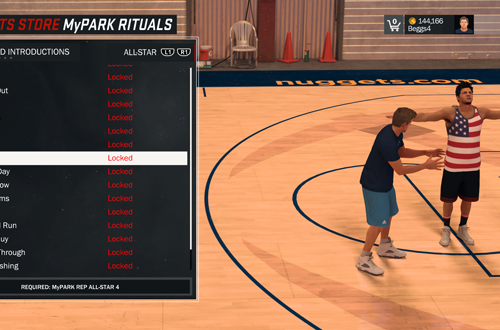 A common refrain these days is that you shouldn’t punch down. It usually refers to comedy, but it’s tied into the age-old concept of “pick on someone your own size” and there being no honour in an unfair fight; don’t take the low road, or be a sore winner. 2K certainly didn’t get that memo, as one of the Park intros in NBA 2K17 is a not-so-thinly-veiled potshot at EA Sports and NBA Elite 11. The intro, which was named “Glitch”, features one player replicating the T-pose bug that’s commonly referred to as “Jesus Bynum”, while his teammates laugh uproariously. Subtle! Considering the success of NBA 2K and struggles of NBA Live, it was definitely punching down.

Although it was petty, it’s not surprising. There has been bad blood between Visual Concepts and Electronic Arts ever since EA outsourced a Madden port to VC, and the deal went sour. An article even detailed the feud, revealing that devs at 2K revel in the shortcomings of NBA Elite 11 and the NBA Live series in general. It’s understandable to some extent, but considering how successful NBA 2K has become, it’s also rather childish. The way that 2K reps have balked at valid criticism in recent years, and even attempted to quash a negative review, demonstrates that they’re not so different. In fact, that review debacle is an honourable mention for one of their pettiest moments. 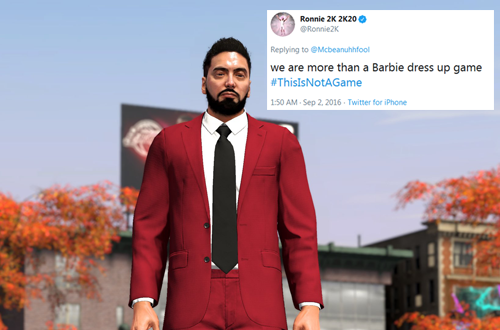 I realise that there’s a certain futility in calling out Ronnie 2K’s pettiest moments. For all his foot-in-mouth gaffes and unprofessional remarks over the years, he not only remains employed, but maintains a kind of celebrity status. In his defense, he does get a lot of hate and inappropriate remarks directed at him, and I’m not about to condone being abusive towards anyone. He has brought some of the scorn upon himself with what he’s said however, and his pettiest moments are prime examples. Some of his potshots at NBA Live, such as the snarky accusations about the official patches for NBA Live 10, were out of line. It was definitely a case of “mind your own business”.

Of course, there was also the ridiculous “We are more than a Barbie dress up game” remark in response to a valid criticism, which aged like milk. There’s calling Flight a “bully” and mocking people for (correctly) stating that NBA 2K20’s Neighborhood was identical to NBA 2K19; petty comments completely lacking in class. Frankly, I don’t like the arrogant image that he’s perhaps unwittingly cultivated for the brand. It’s one of the reasons why although I’ve become a big fan of the series, I’ve never felt the same personal affinity for 2K that I have for NBA Live. The fact that I grew up with NBA Live is obviously a factor too, but Ronnie 2K’s pettiest remarks haven’t helped. 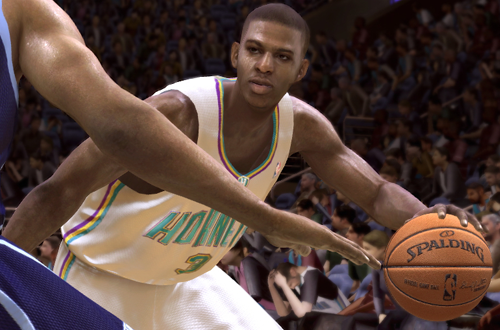 If we’re being completely fair, though – and we should be – EA Sports has hardly been innocent of trying to sling some mud themselves. During the preview season for NBA Live 08, EA released a bunch of screenshots featuring Chris Paul. On the surface, there wasn’t anything wrong with that. CP3 was a rising star at the time, and a player that gamers would most likely be interested in seeing in previews. The cheeky part about it – and I’m being charitable when I say cheeky, because it honestly was one of their pettiest moves – is that he was the NBA 2K8 cover player. The clear implication was that EA had done a better job with 2K’s cover player than 2K themselves had.

There really can be no doubt about that, as it wasn’t just one CP3 screen, but a whole set. Considering that the competition was heating up back then, the pettiness was hardly surprising, but was it accurate? Comparing Chris Paul in NBA Live 08 and NBA 2K8, I’d say that it probably was. The funny thing is that Ronnie 2K later implied certain players weren’t featured in 2K’s previews due to their deals with EA. Whether the situation changed, it was 2K’s internal policy rather than a legal one, or just an excuse, remains unknown. Either way, EA weren’t playing by those rules with NBA Live 08, and it was a cheap shot at a time when they were flying back and forth. 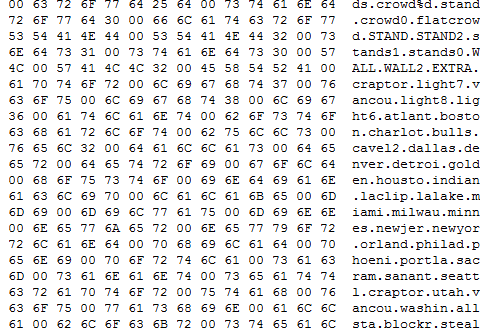 On a lighter note, not all pettiness is worth making a fuss over. On some occasions, it can certainly be humorous, and a potshot hidden in the text strings of a game’s exe file isn’t something to get mad about. I’ve mentioned this in a few previous articles, but it’s a fun bit of trivia that’s always worth revisiting. As most basketball gamers will no doubt recall, the NBA Live series used to be developed by EA Canada. 1995 saw the Toronto Raptors and then-Vancouver Grizzlies debut in the NBA, and therefore, NBA video games. Being that the EA Canada studio was located in Burnaby, there was a certain amount of bias towards Vancouver’s team among NBA Live 96’s developers.

That cross-country rivalry with the Toronto Raptors resulted in a small dig at their fellow expansion team. It can’t be seen anywhere in-game, but as noted above, if you comb through the text strings of NBA Live 96 PC’s executable file, you’ll find that a couple of internal references to the Raptors’ assets refer to them as the “Craptors”. It’s kind of petty and silly, though ultimately fairly harmless and also well-hidden. You can also find a text string for “Benchwarmer” among the labels for player positions. It doesn’t show up anywhere in-game either, but it’s another amusingly snarky gag that ended up being left over in the code. It’s petty, but not in a mean-spirited manner. 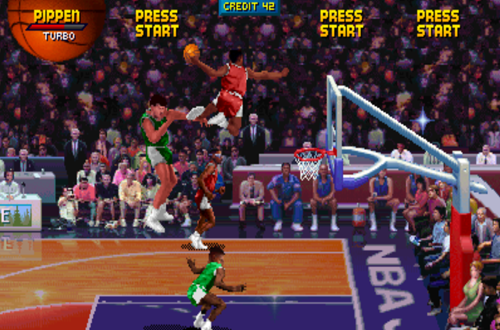 Considering how heated the rivalry between the Chicago Bulls and Detroit Pistons was back in the 80s and early 90s, it’s no surprise that some of the pettiness spilled over into the fanbases of the both teams. In fact, it led to one of the most infamous, pettiest design choices in basketball gaming! NBA Jam creator Mark Turmell was a huge Pistons fan, and therefore had no love for the Bulls. When he was programming the classic arcade hoops title, he ensured Chicago would be afflicted by a fatal flaw. Whenever the Bulls faced the Pistons, their abilities would evaporate in the clutch. Against all other opponents, Bulls players would perform as normal in crunch time.

Despite being a huge Bulls fan, I can’t be mad about that. It’s a sneaky thing to do, and arguably sour grapes after the Bulls had finally toppled the Pistons in the Playoffs, but you know what? Little secrets like that made NBA Jam special, and it was hilarious to get confirmation years later that no, gamers weren’t imagining things when they felt that the Bulls always seemed to struggle against the Pistons. It wasn’t fair, it wasn’t balanced, and it was undoubtedly one of the pettiest things that a developer has done with the virtual hardwood. It’s also an Easter egg born of a genuine enthusiasm for the sport, and that’s way better than punching down or snarking at your target audience.

Do you remember some of these petty moments? What are some of the pettiest cheap shots and digs that you can recall? Are you bothered by any of them, or do you feel that all is fair in love and war? Have your say in the comments below, and as always, feel free to take the discussion to the NLSC Forum! That’s all for this week, so thanks for checking in, have a great weekend, and please join me again next Friday for another Five.