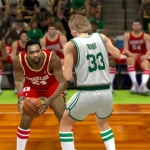 On this day in 1979, NBA history was made on opening night. In a 114-106 victory over the Houston Rockets, the Boston Celtics’ Chris Ford made the very first three-pointer in league history with 3:48 remaining in the first quarter. In that same game, the legendary Larry Bird made his professional debut, scoring 14 points to go along with ten rebounds and five assists. Elsewhere, Bird’s rival Magic Johnson also made his NBA debut, scoring 26 points and enjoying a 103-102 victory over the San Diego Clippers, courtesy of Kareem Abdul-Jabbar’s gamewinning skyhook.

The arrival of Magic Johnson and Larry Bird, along with the debut of Michael Jordan five years later, propelled the NBA into a new golden age. All three legends appeared on separate covers for NBA 2K12, but since I’ve already talked about NBA’s Greatest in a previous Wayback Wednesday feature, I thought I’d do something a little different to mark the occasion. Using HAWK23’s amazing Ultimate Base Roster, I replayed the NBA debuts of Magic Johnson and Larry Bird using NBA 2K14 PC. Could I replicate their numbers and success?

With the help of UBR, let’s take a look back…way back… The NBA debut of Larry Bird was a game that featured a lot of noteworthy players. In addition to Larry Legend, the 1979-80 Boston Celtics featured Hall of Famers Nate “Tiny” Archibald and Dave Cowens. The Houston Rockets boasted the late great Moses Malone, Rick Barry, Calvin Murphy, and Rudy Tomjanovich, who later coached the team to back-to-back championships in 1994 and 1995. As I mentioned above, the Celtics won the game 114-106, with Bird scoring 14 points on 6-for-12 shooting, grabbing ten rebounds, and handing out five assists.

I decided that I’d try to replicate Chris Ford’s distinction of hitting the first three-pointer in league history, though I didn’t wait until late in the first quarter to do so. I knocked one down with 11:13 remaining, accomplishing the feat and setting up a run that allowed me to take a 26-15 lead into the second quarter. Despite the fact I wasn’t familiar with many of the players coming off the bench, I felt like I was in control of the game. My confidence was misplaced; the Rockets aggressively cut into the deficit in the second quarter, and by halftime, the game was tied at 44.

My main problem was that I just couldn’t knock down jumpshots with Larry Bird, and layup opportunities were similarly scarce for him. Cowens’ rebounding and points in the paint kept the team afloat as I held a slim 67-65 lead heading into the fourth, but the Rockets took control once more and raced ahead, ultimately winning 100-91. Bird ended up shooting 9-for-30, good for 21 points to go along with eight rebounds and eight assists. Moses Malone was dominant with 24 points and 17 rebounds, while Calvin Murphy scored 14 points and Rick Barry had 12 off the bench. All in all, history was a lot kinder to Larry Legend than my attempt at recreating his NBA debut. Mindful of how I’d blown Larry Bird’s debut, I resolved not to do the same when recreating Magic Johnson’s first NBA game. At first I was successful, running out to a 7-1 lead, with a couple of crafty passes from Magic and strong finishes by Kareem Abdul-Jabbar. The Clippers came roaring back however, and despite my best efforts, the game was close at the end of the first, with a score of 31-27 in favour of the Lakers. I tried for a little Showtime, but without James Worthy to complete the trio, it wasn’t quite as successful. Kareem was in double-digits by halftime, and Magic had nine points and six assists, but I only managed a 50-49 lead.

It was a familiar tale in the third quarter. I’d go on a small run and then go ice-cold, while the Clippers continued to make buckets and draw fouls to get to the free throw line. I began to get frustrated, which didn’t help my cause. I managed an 81-77 lead heading into the fourth, and after a couple of quick baskets, I believed I was in control. Once again, I was mistaken. A couple of fouls and turnovers allowed the Clippers to take a 98-94 lead late, and I had visions of another disappointing loss. However, a couple of stops and timely baskets allowed me to go on an 11-2 run, and in the waning minutes, I held onto a 107-102 lead.

The game wasn’t quite over yet, though. The Clippers managed a run to take a 109-107 lead in the final minute. A baseline jumper by Magic tied the game, but Brian Taylor made a shot to put San Diego up by two. With less than 15 seconds left, I ran down the clock, and ended up launching a three with Magic; it was good! With three seconds left and no timeouts remaining, World B. Free launched a long three that thankfully missed. History was rewritten, with Magic hitting the gamewinner in his NBA debut rather than Kareem. He finished with 30 points and 11 assists, while Kareem had 29 points and 11 rebounds, and Free led all scorers with 33 points. It’s been a while since I played a full game of NBA 2K14 PC, so I was quite rusty when it came to its gameplay mechanics and some of its quirks. I remember feeling quite disappointed with NBA 2K14 after really enjoying NBA 2K13, and in playing these games, I was quickly reminded of some of the issues that really bothered me back then. I had quite a few frustrating moments, which did take away from the fun a little bit. However, hitting the gamewinner with Magic definitely made the exercise feel worthwhile, and it was something a little different to try, so I don’t regret it.

I obviously have to give thanks and a lot of credit to HAWK23, Suriad, and everyone who has contributed to the Ultimate Base Roster for NBA 2K14. It’s a tremendously detailed mod that allows us to easily do something like this on a whim, and has unquestionably added a lot of replay value to NBA 2K14, as well as NBA 2K12. If I were to spend a little more time getting used to the game again, I know that I’d be able to put UBR to good use. As it stands, it’s great being able to fire it up every now and again for a feature such as this one.

As for Magic Johnson and Larry Bird, while I might not have been able to recreate both of their NBA debuts perfectly, their legacy in real life certainly speaks for itself. I’m sure that folks back then expected them to be special players, but few probably foresaw the heights to which they, along with the other stars of their era, would ultimately lift the league. Through the historical content in the NBA 2K series, along with mods like the Ultimate Base Roster, it’s fantastic that we remain aware of them and their greatness, and that we can still ball with them on the virtual hardwood.

Well, it’s good to have mods like UBR, but it’s too big, so the quality is inconstant depending the season you play. Some times is pretty good (roster, textures), sometimes it’s terrible (roster & textures too).

Another point is that Hawk23 isnt IMO a good guy : i donate him few bucks, never have any answer, he blocked me on twitter for no reason, and now he asks money for updates & support…

Well, the further you go back in time, the harder it is to replicate accurately in a modern basketball game. Given the amount of hard work that has gone into UBR, I don’t think I’d ever use the word “terrible” myself. Speaking from experience creating historical mods and whatnot, sometimes it goes better than other times, and without HD photos, it’s harder to make face updates the further back you go.

Thanks, glad you enjoyed it!