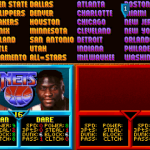 This is Wayback Wednesday, your midweek blast from the past! In this feature, we dig into the archives, look back at the history of basketball gaming, and indulge in nostalgia. Check in every Wednesday for retrospectives and other features on older versions of NBA Live, NBA 2K, and old school basketball video games in general. You’ll also find old NLSC editorials re-published with added commentary, and other flashback content.

Today, I present you with a game of NBA Jam Tournament Edition on PC, featuring Yinka Dare. Now, NBA Jam TE is one of my all-time favourite basketball video games, and in my opinion, one of the best arcade hoops games ever made. Conversely, and with all due respect, the late Yinka Dare’s ranking among NBA alumni isn’t quite as stellar. As I’ve mentioned before, his ratings in the PC version of NBA Jam TE are some of the most insulting you’ll ever find in a basketball video game, having been severely nerfed from the Super Nintendo version. Outside of his Dunking, Blocking, and Power ratings, there isn’t a lot to work with.

However, despite ratings that are mostly made up of ones and zeroes, it’s possible to dominate with Yinka Dare in NBA Jam TE. In fact, not even a Clutch rating of zero can prevent Dare from getting the job done in crunch time! Don’t believe me? Well, let’s take a look back…way back…

Check it out here on our YouTube channel if you can’t see the embedded video. While it’s a little easier to accomplish feats like this in arcade basketball games, even in sim titles it can be a lot of fun to have big games with players whose ratings shouldn’t normally allow it. In that respect, it’s kind of like watching an unlikely player erupt for 50 points in real life. In any case, I hope you enjoyed the video; be sure to check in each and every Wednesday for more videos, retrospectives, stuff from the archives, and other Wayback content!