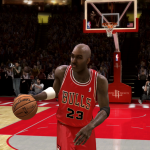 This is Wayback Wednesday, your midweek blast from the past! In this feature, we dig into the archives, look back at the history of basketball gaming, and indulge in some nostalgia. Check in every Wednesday for retrospectives and other features on older versions of NBA Live, NBA 2K, and old school basketball video games in general. You’ll also find old NLSC editorials re-published with added commentary, and other flashback content. This week, I’m taking a look back at an old custom roster for NBA Live 08 on Xbox 360 that I discovered in my archives.

Through looking back at old basketball video games for Wayback Wednesday, I’ve been able to make a few discoveries. Whether it’s changing my opinion on a game one way or another, recalling a forgotten feature, or even noticing an error that I’ve been able to some overlook for more than two decades, covering old games on a regular basis has resulted in some interesting experiences. There’s something very satisfying in gaining a new perspective, filling in a gap in your knowledge, and for that matter, simply discovering something cool. It’s like finding buried treasure.

Today, I’d like to talk about a different kind of discovery: a custom roster for the Xbox 360 version of NBA Live 08. Now, I’ve been able to go back and find a few roster mods and the like in my archives over the years, but they’ve generally been for the PC version of various NBA Live titles. Finding some original content for the console releases is much rarer, at least when it comes to my archives. As soon as I found it, I knew it was something I’d have to revisit and talk about here in Wayback Wednesday. Let’s take a look back…way back…

First, here’s the story of how I came to discover this custom NBA Live 08 roster. I needed to get a couple of screenshots of NBA Live 08 on Xbox 360 for Part 2 of my ongoing series about Familiar Faces back in Familiar Places, specifically Jason Kidd, Chris Webber, and Steve Francis. While I had the Elgato hooked up, I decided I’d take some time to get some other screenshots to have on hand for articles. When I looked at the rosters, I noticed that the active one had been auto-saved following a couple of fictional trades. Going through my saved rosters, I chose one that appeared to be from the end of the 2008 season. When I loaded it, however, it was something else entirely. 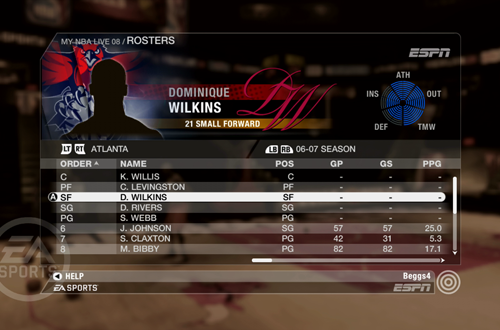 As I scrolled through the team rosters, I happened to notice that Kevin Willis was on the Atlanta Hawks, with no portrait. This confused me, as Willis had retired following one last run with the Dallas Mavericks in 2007, and didn’t make the cut for either version of NBA Live 08. There would’ve been no reason for him to be added to the current roster that year, especially on the Hawks where he spent the first decade of his career, followed by a second stint in 2005. That’s when I noticed a couple of other familiar names on Atlanta’s roster, such as Dominique Wilkins, Spud Webb, and Doc Rivers; all former Hawks players that had been long-retired by the 2008 season.

Moving on to the Boston Celtics, I saw that their starting five was similarly retro, with the likes of Larry Bird, Kevin McHale, and Robert Parish. The Chicago Bulls featured Michael Jordan, Scottie Pippen, and Dennis Rodman in their lineup. At a glance, the benches for those teams were comprised of active players who were currently on those teams’ rosters. Because I wanted to get the screenshots I was after, I put the roster aside for a moment and continued my search for the last official roster update. Fortunately I still had it saved as well, and after making a backup of it and getting the screenshots I wanted, I resolved to take a closer look at the mysterious retro roster.

The first thing I wanted to do was to check the rest of the teams to see how many of them had new content, and just what had been added. Loading up the roster again, I saw that only the Pistons, Rockets, Lakers, Knicks, 76ers, and Jazz had retro players, and only in their starting lineups. The starting fives were from historically significant teams: the Bulls, Rockets, and Jazz were from the 1997 or 1998 seasons, albeit with Steve Kerr starting for the Bulls. The Knicks appear to be their 1971 squad, while the Lakers are from 1985. Boston and Detroit feature the starting fives of their 1986 and 1990 championship teams respectively, while the Hawks are from the mid 80s. 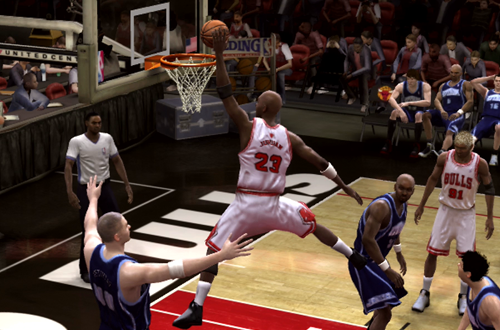 In short, it’s a limited and makeshift classic team roster for NBA Live 08 on Xbox 360. It has nine teams, all of which have only five players; in most cases the actual starting five or the team’s top five leading scorers, with a couple of substitutions made for lineup balance and/or fun. There are some inaccuracies such as players’ names being misspelled, incorrect jersey numbers, and a couple of players have been mixed up, such as Dennis Rodman and Joe Dumars on the Pistons. Obviously, there’s no custom art. However, the basic concept is there, and it’s something different to play with. It’s an example of the minimalist modding that I’ve previously talked about.

NBA Live 08’s Create-a-Player tools weren’t particularly deep when it came to the face options. They’re certainly no substitute for actual face textures, which once again isn’t an option here. An admirable effort has gone into player likenesses, though it reminds me a little of the fictional players on the classic teams in NCAA March Madness 08 and NCAA Basketball 09. That actually makes it kind of fun in a way, and given the limitations of the CAP face options, it’s more than understandable. With a limit of 50 created players in an NBA Live 08 roster, there’s not much more that could be done as far as adding complete teams, or many more squads of five.

Nevertheless, nine teams of five retro players is still something, and there’s a real novelty in having them in the game. Care has been taken to give players the right ratings, and it’s cool to see the created Michael Jordan break out a classic “jumpman” dunk. That may sound weird considering the authenticity of the retro content in recent NBA 2K games, not to mention the detailed rosters that many of us have made on PC, but you have to remember that most of the stuff that we do in the modding community isn’t feasible on console. That NBA Live 08 roster was making the most of the in-game tools to add a handful of classic teams that are actually quite fun to play with. 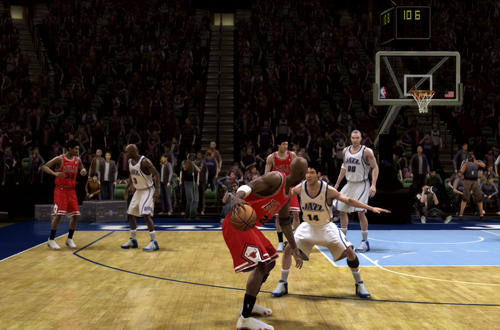 On top of that, like any custom roster in NBA Live 08, it can be used in Scenario mode. For the uninitiated, Scenario mode allowed us to set up a custom gameplay situation and play it, as well as save scenarios so that we could replay them again and again. It’s a mode that both NBA Live and NBA 2K have featured over the years, but has sadly fallen by the wayside over the past decade. With this NBA Live 08 roster, it’s possible to set up a few fun scenarios such as the classic Lakers vs Celtics clashes in the 80s, or the final seconds of Game 6 of the 1998 NBA Finals. The latter is what I elected to do, and let’s just say I needed to manage the clock and defend better!

Alright, so that’s what the roster is in a nutshell. The question remains: where did it come from? The file was last modified on April 8th 2008, after the final official roster for NBA Live 08 came through. I know that I didn’t create it, and no, I’m not just saying that because it has a few errors here and there. While I’ve made a lot of rosters over the years and don’t remember every moment I spent working on them, I believe I’d at least have vague memories of doing the work to create starting fives for nine retro teams. Given the way roster sharing worked in NBA Live 08 on 360, it’d have to have come from someone I know, but it seems no one else recalls its origins either.

Returning to a metaphor I used at the beginning of this article, discovering this NBA Live 08 roster was indeed like finding buried treasure. I’d forgotten all about it, and though it jogged a few vague memories, I had to try and find out more details. It was definitely fun to spend some time with it, and get a few screenshots for posterity. As I’ve said before, minimalist modding is something of a lost art now that we’ve grown accustomed to comprehensive roster updates and total conversions. It’s a throwback to what many of us did before we discovered modding: using the in-game customisation tools to create something different, as best we could. There’s a lot of nostalgia in that. 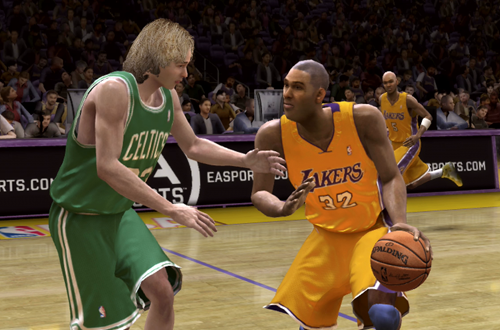 Although I’m glad we have the capacity to make bigger and more detailed mods on PC, there is something special about a small project like this NBA Live 08 roster for the Xbox 360 version. It’s maximising the available resources to the best of its ability, and employing a certain amount of imagination. It’s about creating a new gameplay experience, rather than a deep, accurate project. Again, I’m glad big projects are viable, but there’s something really enjoyable in the simplicity of this NBA Live 08 roster. I’m glad that I kept it, and even feel tempted to fix it up a little. I’ll always keep the original version though, as a reminder of the treasure that I stumbled upon.