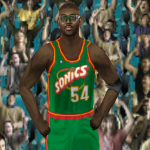 This is Wayback Wednesday, your midweek blast from the past! In this feature, we dig into the archives, look back at the history of basketball gaming, and indulge in some nostalgia. Check in every Wednesday for retrospectives and other features on older versions of NBA Live, NBA 2K, and old school basketball video games in general. You’ll also find old NLSC editorials re-published with added commentary, and other flashback content. This week, I’m taking a look back at yet more NBA players who became familiar faces in strange places, and those stints in video games.

Just when you thought I was done talking about familiar faces in strange places, here is part four in an ongoing series of Wayback Wednesday articles! Not all of these players are Hall of Famers or even perennial All-Stars, but they are nevertheless significant and recognisable, thereby qualifying as familiar faces. They’re also players that we grew accustomed to seeing play for one or two teams in particular, so the strange places they ended up in do make for a jarring sight, both in real life and on the virtual hardwood.

Once again, I’m looking at these familiar faces in strange places through the lens of basketball video games, in part because that’s obviously what we cover here at the NLSC, but also because it emphasises how games like NBA Live and NBA 2K in particular act as time capsules and interactive almanacs. From past champions and the glory days of the game’s brightest stars, to the forgotten and overlooked stints I’m recalling here, those memories come flooding back upon firing up old favourites. Let’s take a look back…way back… 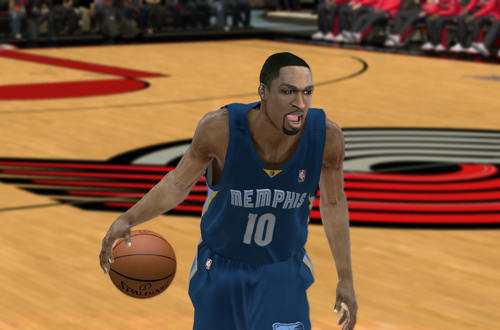 Compared to Madden, there haven’t been as many NBA players who have been hit by a superstitious “cover curse” involving NBA Live or NBA 2K. One player who does make that short list, however, is Gilbert Arenas. After breaking out with the Wizards and becoming one of the league’s brightest stars, injuries and legal problems derailed Arenas’ once promising and high-profile career. It also resulted in him joining the ranks of familiar faces in strange places, as the Wizards traded him to the Orlando Magic for Rashard Lewis. The move failed to resurrect his career, and his short stint with the Grizzlies only produced an odd sight in real life and NBA 2K12 alike. 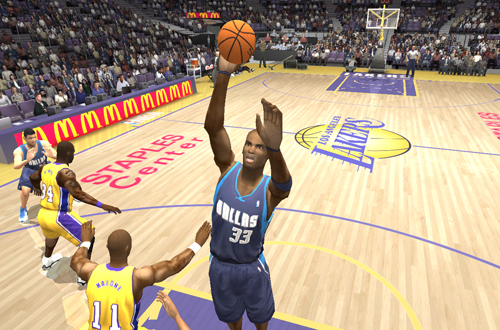 The bulk of Antawn Jamison’s career was spent with the Golden State Warriors and Washington Wizards, but those years were separated by a single season with the Dallas Mavericks in 2004. It’s a season that saw him relegated to the bench – more on that in a moment – after establishing himself as a regular starter for the Warriors the previous four seasons. His play off the bench did yield the Sixth Man of the Year award though, and made that Mavericks team an interesting one to play with in games like NBA Live 2004. In fact, not only is this stint remembered in the game’s default roster, but in the preview of Dynasty mode as an example of a trade cutscene. 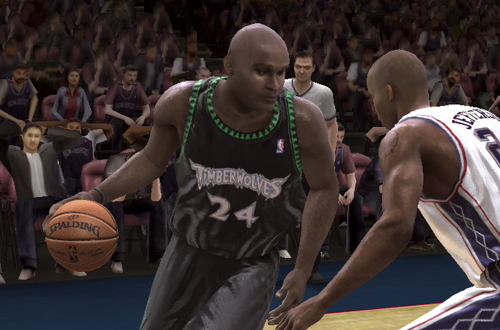 As you can probably guess – if you didn’t already know – the player that started for the 2004 Mavericks ahead of Antawn Jamison was Antoine Walker, acquired from the Boston Celtics that same offseason. It was also Walker’s only year in Dallas, which adds to the uniqueness of that squad. Once again, the team can be seen in NBA Live 2004 (and ESPN NBA Basketball for that matter), but NBA Live 08 and NBA 2K8 capture his overlooked final year in the NBA with Minnesota. His appearance on the Hawks and Heat in the 2005, 2006, and 2007 season games might also stand out as strange, but his Mavericks and Timberwolves tenures are what come to mind for me. 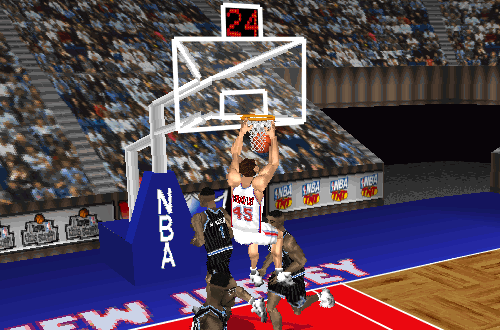 Many older fans will recall the 7’6″ Shawn Bradley playing for the Philadelphia 76ers, where he wore #76, or as a member of the Dallas Mavericks. He arrived in Dallas by way of New Jersey though, having been traded to the Nets for Derrick Coleman in 1995. As such, you can find him on their default roster in NBA Live 97. However, Don Nelson’s wheeling and dealing at the 1997 deadline brought him to Dallas, and the rest is history. Incidentally, despite a reputation for being put on posters, Bradley was an excellent shotblocker. Along with Shaquille O’Neal, he’s the only player to tally at least 22 points, 22 rebounds, and 13 blocks in a game; off the bench, no less! 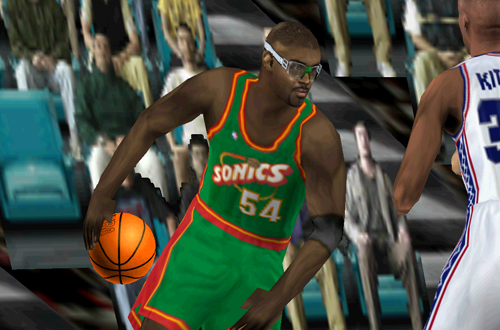 When I think of Horace Grant, I picture him as either a member of the Orlando Magic or the Chicago Bulls. The former is where he played when I first really started getting into basketball, and of course he was a big part of the latter’s first three titles. Grant also had a second stint with the Magic in the early 2000s, which divided his two years with the Lakers. The season that I’d suggest almost everyone forgets about is the 2000 campaign with the Seattle SuperSonics. He arrived via the trade that brought a rookie Corey Maggette to Orlando, itself an honourable mention when talking about familiar faces in strange places. NBA Live 2000 is where you’ll see Grant in Sonics green. 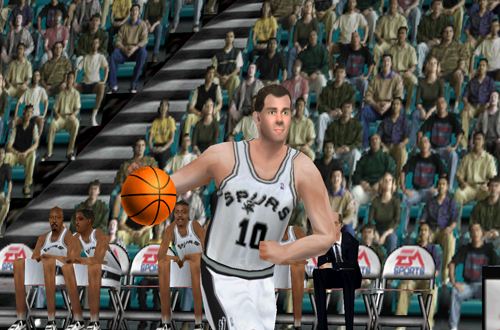 If you have any knowledge of the Australian NBL, then Andrew Gaze qualifies for the list of familiar faces in strange places thanks to his NBA stints. The sight of the best player in the history of Australian basketball in a Melbourne Tigers uniform or the green and gold of the Boomers is quite familiar. Seeing him in the Washington Bullets jersey that he briefly wore in 1994, or playing for the San Antonio Spurs in 1999, conversely, is quite jarring. It happened though, and his time with the 1999 champions resulted in Gaze appearing in the updated rosters for NBA Live 99. He’s also on their roster in NBA Live 2000, though he’d already returned home by then. 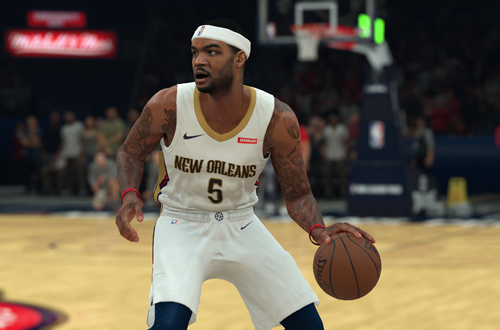 An entertaining dunker and long-time Hawk, Josh Smith’s career went downhill after he left Atlanta for the Detroit Pistons. It didn’t help that the league was changing and he didn’t have the jumpshot to be a stretch four, though definitely seemed to consider himself one! Smith soon moved on from Detroit to Houston, in the process playing 83 games in 2015. His time with the Rockets and Clippers was mostly unmemorable, but it’s his three-game stint with the New Orleans Pelicans back in the 2018 season after missing the entire 2017 campaign – seen briefly in roster updates for NBA 2K18 and NBA Live 18 – that stands out as odd, as well as an unceremonious end to his career. 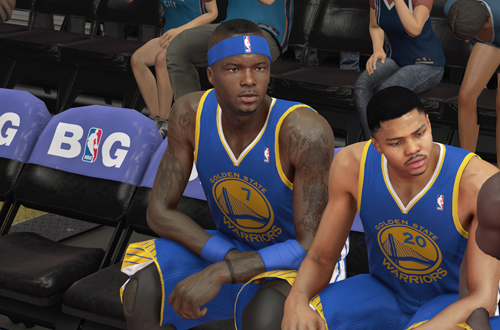 After entering the league with the Portland Trail Blazers and setting a new record for being the youngest player to ever play in an NBA game – a record set by fellow rookie Kobe Bryant only a month earlier, and later broken by Kobe’s teammate Andrew Bynum – Jermaine O’Neal is best remembered for his tenure with the Indiana Pacers, where he broke out as a perennial All-Star. His later career saw him bounce around, including a short stint alongside Chris Bosh in Toronto, two-years in Miami pre-LeBron James, two injury-riddled seasons in Boston, and a year in Phoenix. In NBA 2K14 and NBA Live 14, you’ll see his final year with the Golden State Warriors. 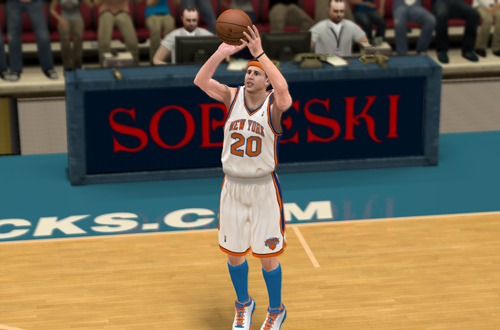 The infamy of the 2002 Western Conference Finals means that Mike Bibby is best remembered for his time with the Sacramento Kings, but that was neither his first nor last stop in the NBA. Originally drafted by the Vancouver Grizzlies – and being one of the last players to play for them in their original location – Bibby spent six and a half years with the Kings before being traded to Atlanta. The games of the late 2000s and early 2010s capture his generally forgotten stints with the Hawks, not to mention the Washington Wizards, Miami Heat, and New York Knicks. The last stop is seen in NBA 2K12, where he’s also a member of the (sort of) pre-order exclusive 2002 Kings. 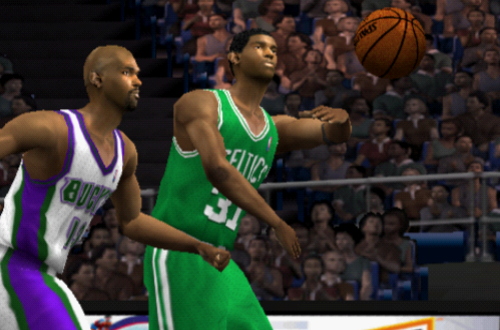 Let’s wrap things up with a rather different example. Most of the familiar faces that I’ve covered in these articles have been veterans ending up in strange places between more famous stints or at the very end of their careers, but Joe Johnson’s time with the Boston Celtics actually came at the beginning of his. The fact that he only spent half a season with the team that drafted him tenth overall in 2001, and that that tenure is greatly overshadowed by his time with the Suns, Hawks, and Nets, makes his days in Boston stand out as odd in hindsight. You’ll see this stint in NBA Live 2002, where Johnson is part of a trio of Celtics rookies with Kedrick Brown and Joseph Forte.

There are still more familiar faces in strange places that I could mention, and those stints can be recalled when we revisit games from many years ago. As I said, they’re time capsules and interactive almanacs documenting the history of the league, and in doing so, the unusual tenures that we forget over time; sometimes because we’d rather not remember them, of course! I do think they are worth remembering though, even when they didn’t always produce our favourite memories of certain players. It can be a lot of fun to play with those familiar faces in strange places once again, and indeed, they might just inspire some interesting suggestions for new retro teams in NBA 2K.

I got into the league whereabouts 2007 so I only remember Bibby on the Hawks. I’m aware his best years were with the Kings, but I feel like those Atlanta squads made enough postseason appearances for his time to be memorable there.

Now those two games with the Wizards… that was weird.

True, the Hawks stints definitely weren’t as weird as the others.

I know what you mean, though. I really got into the NBA in the mid 90s, by which point Charles Barkley was already with the Suns. As such, his 76ers tenure – though it was the team he spent most of his career with – is the one I’m not as familiar with. I’ve gone back and watched games from that era of course, and seen plenty of highlights, but I tend to think of him on the Suns and Rockets rather than the Sixers.