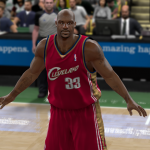 This is Wayback Wednesday, your midweek blast from the past! In this feature, we dig into the archives, look back at the history of basketball gaming, and indulge in some nostalgia. Check in every Wednesday for retrospectives and other features on older versions of NBA Live, NBA 2K, and old school basketball video games in general. You’ll also find old NLSC editorials re-published with added commentary, and other flashback content. This week, I’m taking a look back at NBA players who became familiar faces in strange places, and the games that captured those stints.

With the NBA season on hiatus, a lot of the conversation on Twitter has turned to historical debates and reminiscing. I’ve seen a couple of recent threads talking about big names who had brief stints with teams that are often overlooked and forgotten. Those Tweets have taken the form of facetious captions describing these familiar faces in strange places as a legend of the team in question, sometimes with a photo for emphasis. It’s an apt way of describing the oddity of those stints, many of which we’d rather pretend didn’t happen (or at least, claim to).

They did happen of course, and we’ve got the photos, footage, and records to prove it. We’ve also got basketball video games, which as I’ve grown fond of saying, act as time capsules and interactive almanacs. In a previous Wayback Wednesday article, I noted how video games have marked various milestones in NBA history. This time, I’m reminiscing about the weird stints of well-known players, and the games we saw them in. Let’s take a look back…way back… 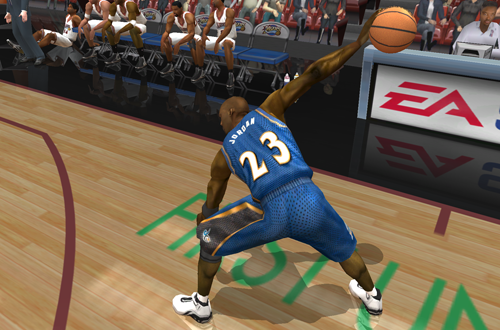 There’s no better place to start than one of the most familiar faces in all of basketball and the stint that many would rather forget, but in its own way, contributed to his legacy. Michael Jordan’s two seasons with the Washington Wizards are captured by the 2002 and 2003 season games, notably NBA Live 2002 and NBA Live 2003, and NBA 2K2 and NBA 2K3. They’re also notable for being his first official appearance as an active player since NBA Showdown. He was even the cover player that year, albeit only in Japan. We focus on celebrating Michael Jordan’s 13 seasons with the Chicago Bulls, and rightfully so, but those video games recall that final comeback. 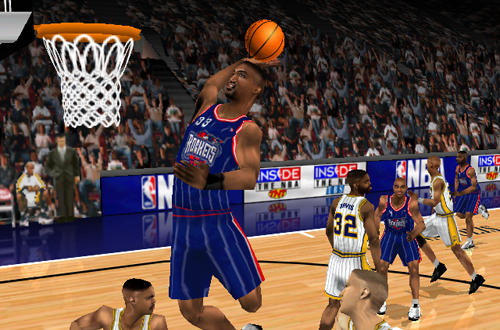 This one comes to us courtesy of the roster update for NBA Live 99 PC, as well as the default rosters of NBA Live 2000 and other 2000 season games that came out before the trade to Portland. Before Scottie Pippen joined the Trail Blazers, he spent a single season playing alongside Hakeem Olajuwon and Charles Barkley in Houston. For some reason, seeing him in a Rockets jersey always looked weirder than a Blazers uniform, but perhaps I was just used to not seeing him playing for the Bulls by then. Pip also has his forgotten final season back with the Bulls represented in NBA Live 2004, but that would be an example of a familiar face back in an old place. 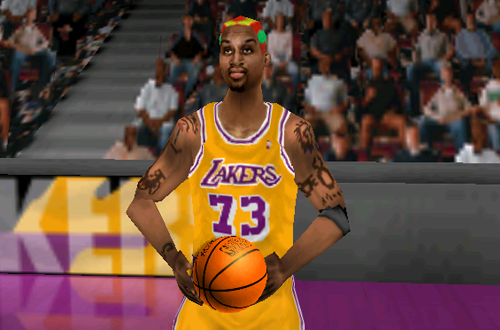 While I’m talking about two thirds of the Chicago Bulls’ Big Three from their second threepeat, I might as well go three for three and mention Dennis Rodman on the Los Angeles Lakers. Another brief stint from the 1999 season – even briefer as he asked for his release as the Playoffs loomed – The Worm’s appearance in purple and gold is likewise remembered on the virtual hardwood thanks to NBA Live 99’s official roster patch. I’ll also make note of his final NBA appearance with the Dallas Mavericks the following season, but as he wasn’t signed by the roster cut-off date, he’s absent from the official rosters of NBA Live 2000 and other games set during that campaign. 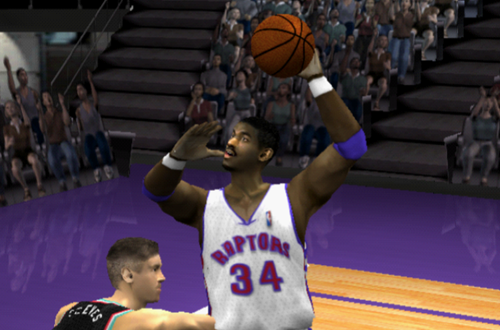 Several Tweets discussing familiar faces in strange places have referred to “Raptors Legend Hakeem Olajuwon”, which speaks to the infamy of the stint, and suggests that such stints aren’t completely forgotten. Fans are growing more accustomed to seeing superstars change teams, not just at the tail end of their careers but in their prime. It was once quite unusual for a player like Olajuwon not to spend their entire career with one team, and the image of The Dream in a Toronto jersey is very strange indeed, as demonstrated in NBA Live 2002 and NBA 2K2. Hakeem and Vince Carter would’ve been a formidable duo if both were in their prime, but instead, it was rather sad to see. 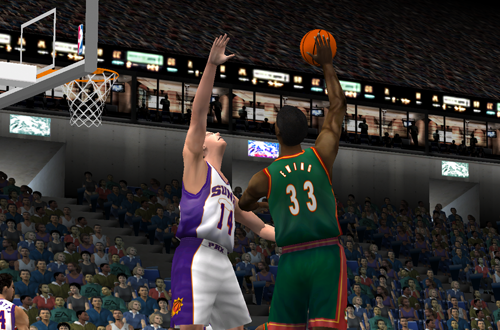 Olajuwon’s Hall of Fame opponent from the 1994 NBA Finals, Patrick Ewing is often considered to be the greatest player in New York Knicks’ history. It’s a well-earned title, but Ewing didn’t finish his career playing at home in Madison Square Garden. After he gave his blessing to be traded in 2000, the Knicks sent him to the Seattle SuperSonics, where you’ll find him in games like NBA Live 2001. He finished his career with the Orlando Magic, coming off the bench and wearing number six instead of 33. He had his moments, such as one last hurrah in MSG, but the end of his career – as seen in NBA Live 2002 et al – was far from the dignified finale that he deserved. 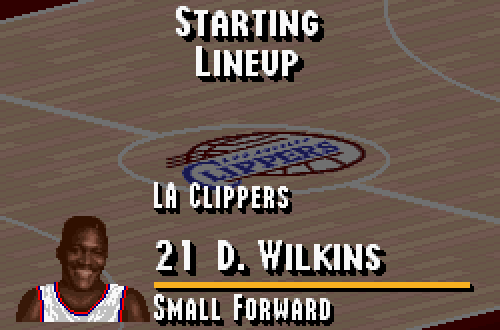 The Human Highlight Film became a road show after his trade to the Los Angeles Clippers in 1994. That move is included in the Super Nintendo and SEGA Genesis versions of NBA Live 95, which featured final 1994 season rosters. Incidentally, Mark Aguirre also played his final year for those Clippers, but was gone by the time Nique arrived. In the PC version of NBA Live 95 and NBA Jam Tournament Edition, he can be found on the Boston Celtics. He isn’t in NBA Live 97 by default, but made it into NBA Live 98 by virtue of his 1997 season with the San Antonio Spurs. NBA Live 99 PC’s roster update captures Wilkins’ final season with the Orlando Magic. 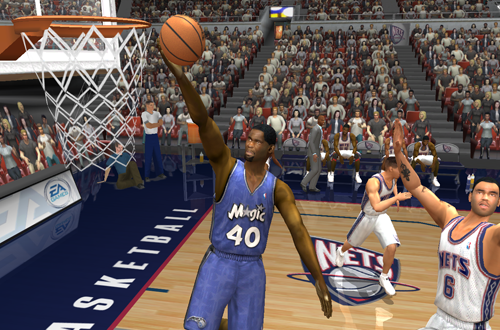 Back in the mid 90s, Shawn Kemp was an established superstar, extremely popular, and seemingly a big part of the league’s future, with the great players who had entered the league in the early 80s now reaching the downside of their careers. The trade to the Cleveland Cavaliers in 1997 turned out to be the beginning of an abrupt decline for The Reignman, but neither his tenure in Cleveland from 1997-2000, nor his stint with the Trail Blazers from 2000-2002, are his strangest stops. That distinction would belong to his lone season with the Orlando Magic, as seen in NBA Live 2003. Oddly, his portrait in NBA 2K11, where he’s part of the Jordan Challenge, is from that stint. 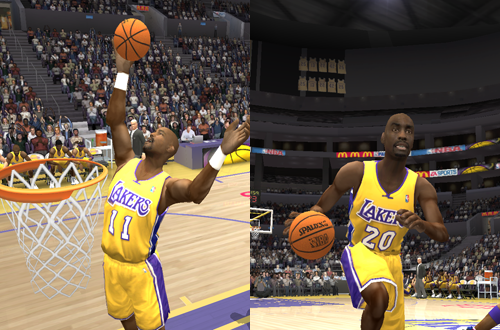 I’m including two familiar faces in strange places for the price of one here, and for an obvious reason. Although Karl Malone had made several trade demands over the course of his long career with the Utah Jazz, it seemed unlikely that we’d ever see The Mailman without John Stockton. That was true in a sense as we didn’t see it in Utah, with Stockton retiring and Malone signing with the Los Angeles Lakers in 2003. His bid to compete for one more championship before hanging it up resulted in an NBA Finals appearance, but the Detroit Pistons downed the Lakers in five. That final year was also marred by injuries, though he did pad his total career points to 36,928.

Gary Payton joined forces with Malone – and Shaquille O’Neal, and Kobe Bryant – in Los Angeles in 2003. He’d already been traded by the Seattle SuperSonics the year before, after playing 999 games with the club. The Glove’s tenure with the Milwaukee Bucks isn’t represented in any official rosters, but it’s worth mentioning here too. His stints with the Boston Celtics and Miami Heat, the latter of which finally yielded a ring in 2006, are also notable and represented in NBA Live 2005-07. I think seeing him and Malone in LA is somehow the stranger sight though, as evident in NBA Live 2004 and ESPN NBA Basketball originally, and via NBA 2K’s retro teams currently. 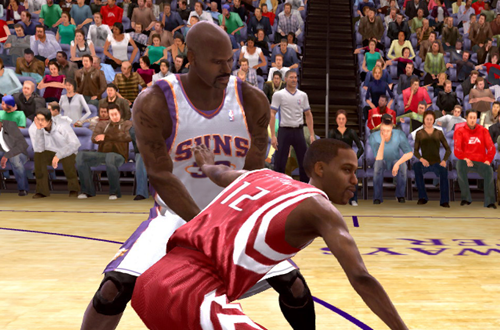 The previews for games released for the 2009 to 2011 seasons capture how Shaquille O’Neal became a gun for hire late in his career. Traded from the Miami Heat to the Phoenix Suns during the 2008 season, Shaq is a Sun in pre-release screenshots for NBA Live 09. He was traded to the Cleveland Cavaliers before the 2010 season, and thanks to a bug with rotation logic in NBA Live 10, often started alongside Zydrunas Ilgauskas for the virtual Cavs. As seen in NBA 2K11, his final season was spent with the Boston Celtics. Shaq’s nomadic journey through the later seasons of his career can best be summed up by this Tweet from ESPN, demonstrating the “Shaq Rainbow”. 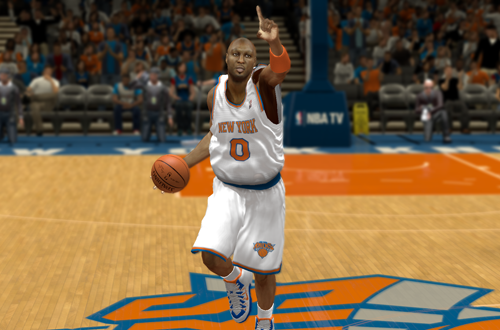 Let’s change things up from multi-time All-Stars to another familiar face in a strange place. If you’ve forgotten about Lamar Odom’s stint with the New York Knicks, don’t worry; it didn’t even last a week! Odom’s year in Dallas with the Mavs (as seen in NBA 2K12) tends to be overlooked along with his second stint with the Los Angeles Clippers, but his Knicks tenure is probably more interesting. Phil Jackson ended up signing him at the very end of the 2014 season, and he didn’t play a single game for the team. The move made the official roster updates for NBA 2K14 though, making the Knicks a team that Odom only ever suited up for in a video game.

Those are just ten examples featuring eleven players, and needless to say, there are quite a few others that are worth revisiting in time. Even though these stints are often associated with players sticking around too long and being well past their prime, and though we claim that we try to forget them, there is something that’s interesting and even entertaining about seeing familiar faces in strange places. Whether it’s simply a love of trivia and oddities, or because it reminds us of a particular season and time in our lives that evokes nostalgia, they end up sticking in our minds. Clips are sometimes hard to find on YouTube, but the reminders will always be there in video games.

I remember Sheed Wallace being added in NBA 2K13 (PS3) in season that spiced up the Knicks lineup) I fondly recall it but have sold PS3 with that roster update. Now I have NBA 2K13 on Wii U (bought after the servers were shut down so there’s only option to make a player similar to Sheed by myself). The original roster is pretty good too with many “og” Knicks with special abilities: Kidd, Camby, K. Thomas, JR Smith, Felton, Shumpert. It’s fun to play for them.

Sheed on the Knicks is definitely a strange sight, especially since he’d been retired for a couple of seasons before that. As it happens, I’d already noted him for a follow-up article on this topic, so I’ll get to him eventually. 🙂