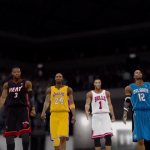 This is Wayback Wednesday, your midweek blast from the past! In this feature, we dig into the archives, look back at the history of basketball gaming, and indulge in some nostalgia. Check in every Wednesday for retrospectives and other features on older versions of NBA Live, NBA 2K, and old school basketball video games in general. You’ll also find old NLSC editorials re-published with added commentary, and other flashback content. This week, I’m taking a look back at the introduction video for NBA 2K12.

Although NBA 2K11 was a tough act to follow, I would suggest that NBA 2K12 was up to the challenge. Continuing to improve upon the gameplay of its predecessor, it also successfully expanded the historical content we’ve come to associate with the NBA 2K series. The Jordan Challenge gave way to NBA’s Greatest, a mode featuring fantastic production values and several of the best teams in the NBA history on top of MJ’s Bulls. The game was hampered by the absence of the Class of 2011 rookies at launch owing to the lockout, but official roster updates would later resolve that issue.

Firing up NBA 2K12 for the first time immediately got you in the mood to play with the new historical teams, with an introduction video that I once ranked as the best among basketball games. Although we’ve seen some slick intros in the years since, there’s still a strong case for NBA 2K12’s boot-up remaining in the top spot. As such, I thought I’d look back at it this week, and the real highlights that inspired several moments in the intro. Let’s take a look back…way back…

Accompanied by Kurtis Blow’s iconic hoops anthem “Basketball“, the NBA 2K12 introduction video immediately sets the tone for the game. The theme is very much “Past meets Present”, showcasing current NBA stars alongside the various Legends. The Legends appear with the visual effects that are applied during their respective games: Bill Russell is in black and white, while stars from the 1980s have washed out colours. The camera rotates around the court as we see the Legends in action. Some moments aren’t based on anything specific (and feature current players), but many do re-create famous highlights. Let’s watch the introduction, and then break it down.

The 2011 NBA Finals, But Mutombo Shows Up NBA 2K12’s introduction video begins with Dwyane Wade, Kobe Bryant, Derrick Rose, and Dwight Howard walking out onto the court. The first highlight we see is a reference to the 2011 NBA Finals, with Finals MVP and champion Dirk Nowitzki shooting a fadeaway over LeBron James. Before the shot goes in however, we see Dikembe Mutombo swat it away – possibly goaltending it, truth be told – and perform his signature finger wag. Both Dirk’s shot and Mutombo’s block aren’t references to a specific moment, but the former emphasises the result of the previous season’s Finals, while we certainly saw a lot of finger wagging from Mt. Mutombo over the years. We then see Isiah Thomas dancing in a circle with the basketball, before slamming it emphatically into the hardwood. This part of the NBA 2K12 introduction video is a re-creation of Zeke’s celebration after hitting a gamewinning shot against the Atlanta Hawks in the 1987 Playoffs, though he’s wearing the Pistons’ road jersey in the intro video as opposed to the home uniform. This moment made it onto quite a few NBA home videos released in the late 80s and early 90s. John Stockton and Karl Malone then provide us with another familiar sight, as they stand side-by-side. Run a Google Image search for the duo, and you’ll find plenty of shots of them doing just that.

A Magical Dish & A Skyhook This is followed by a few more generic moments: David Robinson celebrates, Dennis Rodman shows off his trademark hustle against Dwyane Wade diving for a loose ball, and Chris Paul eludes Gary Payton to make the pass. The ball ends up in the hands of Magic Johnson, who proceeds to perform one of his famous driving no-look passes, reminiscent of the one against the Spurs (only this time, against Kevin Durant). It’s Kareem Abdul-Jabbar who catches the pass, but it’s Kareem from early on his career with the Milwaukee Bucks. The Captain proceeds to sink the same long skyhook that forced Game 7 in the 1974 Finals, though he shoots it over Dwight Howard. After Bill Russell easily secures a rebound against Amar’e Stoudemire, Larry Bird knocks down a three and celebrates. Jerry West blows by Carmelo Anthony, and a young Shaquille O’Neal (in an Orlando Magic uniform) struts back up the court after an off-screen Shaq Attack. Oscar Robertson and Blake Griffin then look on as Julius Erving makes his famous “scoop layup” from behind the backboard. Dr. J’s signature highlight has appeared on countless reels of memorable NBA moments throughout the years. The 1980 NBA Finals may have ultimately belonged to Magic Johnson and the Lakers, but if there’s one play in particular that people remember, it’s the scoop. Speaking of iconic signature moves, Hakeem Olajuwon’s Dream Shake then makes an appearance. The particular moment that’s being re-created came at the expense of David Robinson in the 1995 Playoffs, though in the introduction video, Tim Duncan has the dubious honour of filling in for his former teammate. From the crossover to the fake, spin, second fake, and layup, the moment is represented perfectly in NBA 2K12’s intro. I always found the Dream Shake a little difficult to pull off in-game, especially with the old approach to Isomotion controls, but at least the introduction video provided us with an opportunity to see it in action. Patrick Ewing wasn’t known for his three-point shooting – not a lot of big men were back in his era – but he did make a few. Still, if you’re not familiar with the moment that’s being re-created in NBA 2K12’s intro, you may be confused as to why he’s shown putting it up from range. In the decisive fifth game of the New York Knicks’ first round series against the Boston Celtics, Ewing rebounded Charles Oakley’s blocked shot, faded out to the three-point line, and put up a turnaround shot that rattled in. It was the first postseason long bomb that Ewing made in his career; he’d go on to make seven more threes in the Playoffs before he retired in 2002. As the intro draws to a close, we see John Wall and the late Wilt Chamberlain – oddly around the same height – chatting. Steve Nash licks his fingers as he brings the ball up the floor, dishing off to future teammate Kobe Bryant who posts up on Dominique Wilkins. Derrick Rose then eludes “Pistol” Pete Maravich with a no-look dish to Michael Jordan, who races towards the basket. Tongue-wagging, His Airness takes off from the foul line, something he did on four occasions in the Slam Dunk Contest, including twice in the 1988 event. It’s the contest-clinching slam in the Finals that’s being re-created here though, a fitting way to cap off NBA 2K12’s introduction.

All in all, NBA 2K12’s introduction video is easily one of the best-produced intros we’ve seen in a basketball game. It’s a great concept that’s well-executed, showing off the Legends alongside current superstars in one continuous take. The decision to re-create some of the most memorable highlights and moments in NBA history really paid off, thanks in no small part to the impressive accuracy in capturing them. It’s common to skip intros after you’ve seen them once or twice, but the NBA 2K12 introduction video is one that’s worth watching over and over again. Indeed, the only reason you might skip it is if you’re in a hurry to start playing with all those Legends.

For me the best intro was for NBA Live 99, the year of the cyber athlete, the year easport got big, big!

I have a lot of nostalgia for the old highlight reel intros as well. NBA 2K12 was more creative, though. NBA 2K16 was creative, but not in a way that I particularly liked.

Thanks Andrew for taking from your time to write this articles!

Thanks for reading them and commenting! Makes the efforts worthwhile to know people are enjoying them. 🙂