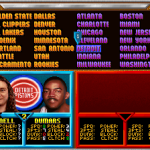 This is Wayback Wednesday, your midweek blast from the past! In this feature, we dig into the archives, look back at the history of basketball gaming, and indulge in some nostalgia. Check in every Wednesday for retrospectives and other features on older versions of NBA Live, NBA 2K, and old school basketball video games in general. You’ll also find old NLSC editorials re-published with added commentary, and other flashback content. This week, I’m taking a look back at a few of my favourite secret characters in classic NBA Jam games.

January 14th marked the 25th Anniversary of NBA Jam, the game that truly set the tone in terms of the arcade basketball experience. In addition to celebrating its silver anniversary, NBA Jam has also been in the news as of late due to the possibility of a brand new game being released. Additionally, in a recent interview with Shack News, Tim Kitzrow confirmed that creator Mark Turmell still has the rare version of the game that includes Michael Jordan and Gary Payton. While there are several legal roadblocks that must be cleared, Turmell is investigating the possibility of releasing that rare treasure in celebration of the game’s anniversary.

As a long-time fan of the series, I’d love to see a new NBA Jam game, as well as the release of the rare version of the original featuring MJ and The Glove. It’s a situation we’ll keep an eye on, but in the meantime, it’s always fun to look back at the games that have already been released. I’ve posted a couple of retrospectives on NBA Jam Tournament Edition in previous Wayback Wednesday features, so this time I wanted to focus on a specific element of the original games: their secret characters. They’re arguably as iconic as the high flying dunks, being on fire, and “Boomshakalaka!”, so let’s take a look back…way back…

Going back to what I said when I revisited NBA Jam TE last year, I was completely caught off-guard by the secret characters in the game. Unlocking the expanded rosters was a satisfying reward, but having never read anything about any of the secret characters, I felt like I’d stumbled on something really cool when I went to play another game, and one of them appeared on the randomly chosen opposing team. Such was the charm of video games in the pre-Internet era. These days, listings of cheat codes are easy to find, making it easy to play with those secret characters ourselves. Looking back, these are some of my favourite hidden players in NBA Jam. I’ve dedicated an entire Wayback Wednesday column to discussing this, so it stands to reason that the first secret character that comes to mind is Larry Bird. Larry Legend is playable using a code in NBA Jam TE, although this is something that I didn’t find out until several years later. Along with Carol Blazejowski, he’s one of only two actual former professional players among the roster of secret characters. EA Sports’ NBA Jam titles included retro players, and we’ve grown accustomed to having historical content in NBA 2K, but back then, his inclusion made for a pretty significant Easter egg. I’m not sure if he has proper ratings, but he does seem to be pretty good at threes. Mascots are an obvious choice in terms of secret characters in NBA Jam. Many of them are famous in their own right, and the novelty of being able to play with them is perfect for an arcade basketball game. Being a Chicago Bulls fan, it should come as no surprise that my favourite playable mascot is Benny. I can’t remember if he was the first mascot to show up after I’d unlocked the expanded rosters in NBA Jam TE, but it was always entertaining to hear Tim Kitzrow’s enthusiastic call of “Benny!” every time he went up for a dunk. The Phoenix Suns Gorilla comes in second, followed by Hugo (Charlotte Hornets) and Crunch (Minnesota Timberwolves). When I turned 30 a few years back, my birthday bash was 90s themed. While I was making preparations and discussing the party with friends, the classic theme to The Fresh Prince of Bel Air was brought up more than a couple of times. Allow me to get it stuck in your head once more. If you grew up in the 90s, you likely at least had a passing familiarity with the show, as well as Will Smith’s music. As such, it only made sense to have the Fresh Prince himself in NBA Jam. Joining him on the roster of secret characters was DJ Jazzy Jeff, who couldn’t be thrown off the court, but with a block or shove, you could make like Uncle Phil and tell him “not in my house“. If you create a game as influential as NBA Jam, you at least deserve to be one of its secret characters, right? I’ll admit that my appreciation for including Mark Turmell is retroactive, since as a kid, I didn’t pay a lot of attention to the credits, whether it was a video game, film, or television show. Now that I know more about the history and development of the series, I do enjoy the fact that he gave himself a cameo, and with some strong ratings to boot. It’s a shame that the Mortal Kombat characters – excuse me, “kharacters” – didn’t make it into the home versions of NBA Jam, but at least Midway were represented in some fashion in Acclaim’s PC and console ports. With political discussion being rather contentious these days to say the least, I was a little hesitant to mention these two. However, politics plays no role in this at all; note that I’m Australian, so I have no affiliation to any US political party. The reason I have the former President and First Lady on this list is simply because of how absurd and funny it was to see them as secret characters in NBA Jam. It wouldn’t matter who it was, or which party they represented. The silliness of having them join the ranks of NBA players and soar through the air with a flaming basketball could, quite frankly, only be topped by the appearance of a member of the British Royal Family. I don’t believe that the Prince of Wales has a keen interest in basketball – NBA or otherwise – which makes his presence in NBA Jam even more amusing. Running up and down the virtual hardwood and somersaulting through the air is a far cry from polo, after all. I don’t recall him showing up as an opponent quite as often as the mascots, developers, or some of the other secret characters, but as with the Clintons, it was always funny when he made an appearance. It’s an example of how NBA Jam didn’t take itself too seriously, in the best possible way. Forget King James; Prince Charles has been the heir apparent of basketball royalty since the mid-90s!

Secret characters and unlockable players returned in EA’s 2010 reboot of NBA Jam, as well as the subsequent On Fire Edition in 2011. It was great to see the tradition upheld, but there’ll always be something special about those original players, if only because they did remain secrets until gamers discovered and documented them. If we do get a new NBA Jam game at some point in the not too distant future, I hope we’ll see more secret characters, including some that are as silly and funny as the ones we encountered in the original classics.